In just seven years, BLACK STONE CHERRY progressed from playing 200-capacity club gigs in the U.K. to headlining their first arena tour. This DVD documents one of those triumphant shows, filmed at Birmingham's LG Arena and showcases the band's long-standing love affair with their British audience. Filmed in high definition and available on DVD, Blu-ray and twin DVD+CD pack, the incendiary live set features crowd favorites from all four of the band's studio albums, plus bonus interview material and additional live tracks shot at this year's Download Festival.

The band is thrilled to bring this release to their fanbase, as guitarist Ben Wells attests: "We are beyond excited to bring you all this live DVD. Growing up watching my Elvis and AEROSMITH DVDs and VHS tapes, I never thought I would be in a band that would one day be releasing one — and in an arena at that! We are so honored, humbled, and thankful to have the fans and friends we have in this business and we couldn't do it without the grace of God and all of your support! Sit back and enjoy this live BSC experience. We had a blast filming it!"

Frontman Chris Robertson continues: "I remember our first gig headlining in Birmingham at the Barfly and I thought about that night many times as we were filming this DVD. It was truly an amazing experience that we will cherish forever and we have to give all the credit to the amazing fans for showing up and making it all possible!"

With a running time of over 2 hours, the DVD's track listing runs as follows:

Bassist Jon Lawhon informs us: "We've worked very hard on putting all of this together for everyone and it was the crowd that made this a night we will not soon forget. Thank you all so much for your dedication and support. We love you all and hope you enjoy it!" The band's inimitable sticksman, John Fred Young, underlines their appreciation of BSC fans' loyalty and echoes the DVD's title when he says; "THANK YOU to everyone who stuck with us over the years and who came out and made this night such a special memory for us! This is for you!"

BLACK STONE CHERRY is currently hard at work on album number five which is set to see the light of day in Spring 2016. The band returns to the UK in late January to headline the U.K.'s inaugural "Carnival of Madness" tour with SHINEDOWN, HALESTORM and newcomers HIGHLY SUSPECT.

Check out "White Trash Millionaire" below. 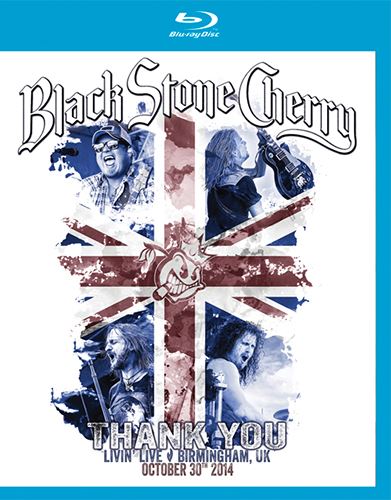