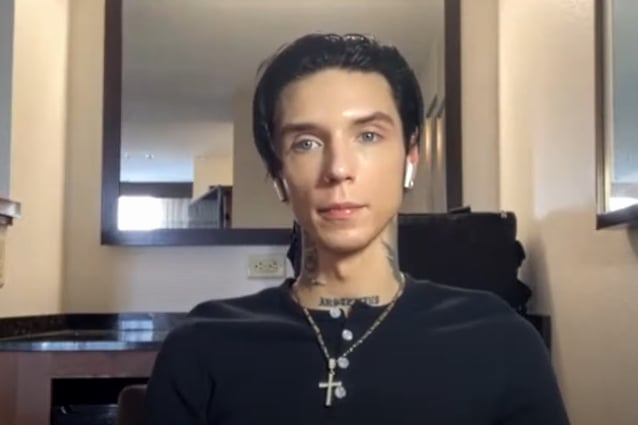 BLACK VEIL BRIDES frontman Andy Biersack recently went on the first video episode of the podcast "Side Jams With Bryan Reesman" to discuss his love for Batman. He mentioned that two his favorite subjects are Batman and theology. He connected the two in explaining how the superhero was a big influence on him growing up.

"This is not to be political or to be dismissive of any kind of religion, but for me, as someone who's non-theistic, I had these heroes like Batman who [were] a reference point for parables or tales of how to live your life," said Biersack. "The thing that impacted me the most as a kid was, create something more of yourself. Even if you're afraid, even if people don't respect you or like you or make fun of you – make something that you're really proud of and wear that outside so that you can eventually become that thing that you want to be. As a teenager and as a kid growing up, wearing my MISFITS shirts and eyeliner, and everybody's throwing stuff at me and making fun of me at school in Ohio, I felt like that was my Batsuit. That was the thing that, regardless of what anybody else thought about it, that was how I projected myself to the world. And that was my giant cape and pointy ears. It was the thing that I thought, 'I don't care if they're freaked out by me or whatever it is. I'm gonna use this as my iconography, the way that I see the world.' And so, in many other ways, just the self-belief, the idea of making something of yourself, not having superpowers. I was not born with a beautiful singing voice. I never opened my mouth and sang in a beautiful soprano voice or a tenor voice, but I figured I could teach myself how to do something that I liked the way it sounded. And I didn't need superpowers to do that. So there's many, many ways that that character has been influential."

When asked about his favorite Christopher Nolan "Batman" movie, he replied: "It's so bizarre because Christian Bale is not my favorite Batman. I don't really like the suit. But I love those three movies so much — the totality of them. My least favorite is 'Batman Begins'. That tends to be everyone's favorite who are Batman fans. 'Dark Knight' is obviously the most famous of the series and one of the most successful movies of all time. But if you talk to dedicated Batman fans, they all say 'Batman Begins' is the best. I really like the third one the most because we go back to my entry point into Batman was 'Knightfall'. That is the 'Knightfall' movie. That's Bane breaking down Batman, breaking his back. I got to see the shot in a live action movie of Bane been holding up Bruce Wayne and breaking his spine, just like on the cover of the first comic book I ever got as a kid. So for me personally, even though ['Dark Knight] Rises' is not seen as the greatest film, I fucking love it. I'll watch it every day."

Biersack also addressed the controversy with some Superman fans over the fact that Kal-El's son recently came out as bisexual.

"The thing that I never understand is the fervor and anger that people have giving people an opportunity to see themselves in these characters that we've loved forever," he said. "Why not have an opportunity for someone who loves this character to see something of themselves in it? It boggles my mind that it would ever change your interpretation of the character for someone else to get to feel more close to them. There's a million different iterations of all these characters. Why not allow people to have the opportunity to be reflected and feel some representation there?"

Tom Taylor, who wrote the November 9, 2021 issue of "Superman: Son Of Kal-El" in which Clark Kent's son, Jon Kent, comes out as bisexual, said in a statement: "I've always said everyone needs heroes and everyone deserves to see themselves in their heroes, and I'm very grateful DC and Warner Bros. share this idea.

"Superman's symbol has always stood for hope, for truth and for justice. Today, that symbol represents something more. Today, more people can see themselves in the most powerful superhero in comics."

Not everybody has been happy with DC Comics' decision to have a bisexual Superman. Arizona senator Wendy Rogers came out against the move, saying, "Hollywood is trying to make Superman gay and he is not." Additionally, actor Dean Cain, known for roles on "Lois & Clark: The New Adventures Of Superman" and the CW's "Supergirl", condemned the decision and accused DC Comics of "bandwagoning."