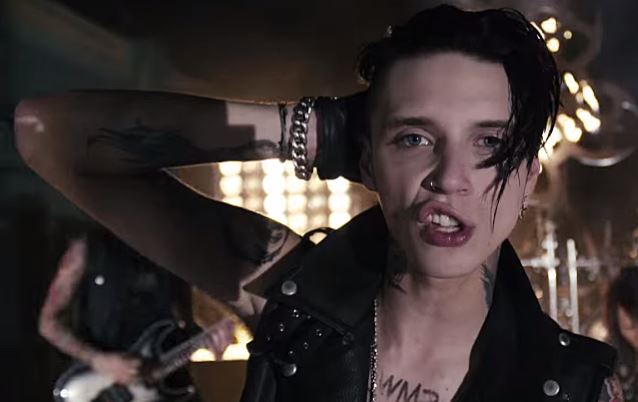 Simmonstold Esquire magazine in September 2014 — in an interview conducted by his son Nick — that "rock did not die of old age. It was murdered. Some brilliance, somewhere, was going to be expressed and now it won't because it's that much harder to earn a living playing and writing songs. No one will pay you to do it."

Asked to weigh in on Gene's comments, Andy told Kaaos TV (see video below): "I think that statement was a little misconstrued. I think what he was trying to say, and what probably wouldn't have gotten the big headline, is that the reality is that rock and roll, in the mainstream, it's in a difficult place right now. People don't buy music, and they certainly don't buy rock bands' music in the way that they used to. And so, for our genre, it's kind of… We're limping along when it comes to public appeal."

He continued: "It's really up to the kids who listen to rock music to get out there, come to the live shows and buy the records when they can and really support the genre. Otherwise, it will get taken away from us, because the hip-hop fans and the pop fans, they buy the records and they go to the shows in big numbers. So I think it's a little bit of both. But I believe that rock and roll is alive and well. I just think that people need to show their support and let the genre keep thriving."

Asked if he thinks any of the newer hard rock artists have a shot at becoming arena-sized acts once the current crop of dinosaur bands are no longer around, Andy said: "The current touring community is... really, the large arenas and stadiums and shed shows are all predicated on the idea of older artists. In five or ten years, when those artists cannot tour anymore, we're gonna see a huge shift in concers and concert attendance."

He continued: "As much as I'd love to think that THE ROLLING STONES can go on forever, or AEROSMITH or whoever else, physically, they will not be able to, eventually. And when that is done, it's gonna be very interesting to see, because the younger bands don't really have the opportunity to move into those venues."

Biersack added: "A band like AVENGED SEVENFOLD I've praised quite a bit publicly, because it's a band that has moved into that arena-size thing for a hard rock band. Obviously, there's bands like FALL OUT BOY and many others who are huge in scale and play those arena shows. But if you look at, like, a hard rock bands with guitar solos and pyro… SLIPKNOT, AVENGED SEVENFOLD… There's really only a few."

The self-titled fourth studio from BLACK VEIL BRIDES sold around 30,000 copies in the United States in its first week of release to debut at position No. 10 on The Billboard 200 chart.

"Black Veil Brides", was helmed by producer Bob Rock, whose resume includes albums by METALLICA, MÖTLEY CRÜE, THE CULT and many others.