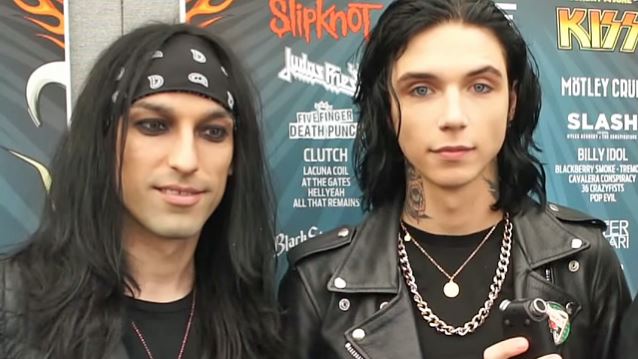 MikeJamesRockShow.com conducted an interview with Los Angeles rockers BLACK VEIL BRIDES at the 2015 edition of the U.K.'s Download festival, which is being held this weekend in Donington Park. You can now watch the chat below.

Asked what is next for BLACK VEIL BRIDES after Download, the band's vocalist, Andy Biersack, responded: "You know what?! Honestly… Probably more of the same for us. And the fact that we want to continue to make records when we can. For us, we're gonna keep touring the rest of the cycle on this record and then go back and probably make another record in the winter… We're headlining the Warped tour this year, so that's really exciting. And then, after that, we're gonna do maybe one more tour. We might come back before the end of the year here in England. And then we're gonna take a couple of months off and probably start making a new record."

He continued: "We put out, I guess, coming up on our fifth record, and… So, I mean, we really like to write records and record records. I mean, it's fun for us. So, every time we think, 'Oh, after this one, we'll take a couple of years off,' six months go by and I'm, like, 'Ah, let's get back in the studio and make music.'"

BLACK VEIL BRIDES will release its first-ever concert DVD and Blu-ray, "Alive And Burning", on July 10. The cover artwork for the set was designed by the band's longtime friend and previous album cover illustrator Richard Villa.