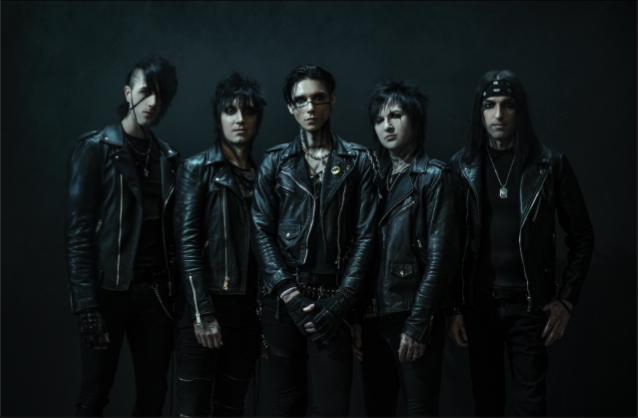 BLACK VEIL BRIDES will release a new single, "Scarlet Cross", on Friday, November 13. A preview clip is available below.

The announcement of a new BLACK VEIL BRIDES song comes three months after guitarist Jeremy "Jinxx" Ferguson told Myglobalmind that he and his bandmates had been "writing up a storm" for the follow-up to 2018's "Vale" album. He said: "I can't talk too about what we envision for the next album, but we are revisiting the idea of another concept record like we did with [2013's] 'Wretched And Divine'. It would be fun to do another concept CD, but we'll see how things pan out. Jake [Pitts, guitar] will be producing it, and we are tracking vocals and guitars at his studio. I'm recording the strings at my studio."

He continued: "With COVID going on, we have all been quarantined and working at home, but when we do get together, it's just us and maybe our wives. When we are all in the same room bouncing ideas off each other, it's a never-ending flood of inspiration and ideas. I'm excited for fans to hear what we are coming up with."

Singer Andy Biersack later confirmed that BLACK VEIL BRIDES was making another concept album and revealed that the band was planning to roll out the effort with more than just music. "There's art, drawings, comic book designs," he said. "We wanna do a movie and all this shit. It's a big, expansive thing and we're really excited about it."

Last year, BLACK VEIL BRIDES released the first in a series of "duologies," essentially two-song singles that will be released with greater frequency. The first duology consisted of the songs "The Vengeance" and "Saints Of The Blood".