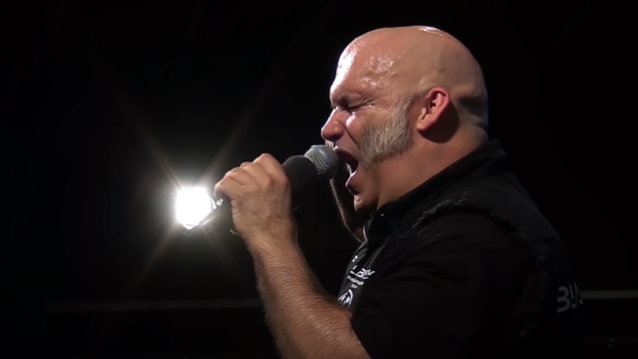 British heavy metal vocalist Blaze Bayley, who fronted IRON MAIDEN more than 20 years ago, was asked in a new interview with Rolling Stone if he was always thinking in the back of his head during his tenure with MAIDEN that at some point they would bring back Bruce Dickinson and that would be the end for him. Blaze responded: "Never. I never had that fear because I thought there were eras of that band. Clive [Burr] and Paul [Di'Anno] were one era. Then there's Bruce and Nicko [McBrain, drums]. That was another era. And I really thought that the third record with MAIDEN with me would be the charm. I thought, 'We've done these two records. And now with the ideas I've got, the writing experience and everything. I have things on my dictaphone and lyric ideas…' I thought, 'When this third album comes out, that is going to change the hardcore fans and put them back with us. We're going to get going, and this is going to be rolling, and we're going to be getting somewhere.' I absolutely believed in my heart that would happen."

He continued: Here's what was happening on the outside. When I joined IRON MAIDEN, EMI, one of the biggest record companies in the world, they sold every factory that they owned. So what's happening? And then, at the end, it was the commercial pressure from EMI. That's because JUDAS PRIEST had a full reunion with their original singer. BLACK SABBATH had a full reunion with their original singer. DEEP PURPLE had a full reunion with their original singer. These were all big successes that bumped their numbers up. The slave masters of music were saying, 'We need to get something. MAIDEN, what can we do?' That was it for me. It was a commercial thing. And there I was. But I was very well treated by the guys, absolutely. And I can't blame them for anything that happened to me afterwards."

Asked how he was told that he was out of the band, Blaze said: "They did the proper thing. We had a meeting with everyone around the table. 'With the greatest respect, everyone is doing this. It's a huge deal. We're sorry. We can't carry on.' I said, 'Is Bruce coming back?' There was this silence for a moment. That decision had been made quite a while ago. I was totally unaware of it. They said, 'Yes, he is.' I said, 'OK. We don't have anything else to talk about. I thank you for everything. And I will never say a bad word about this band because I've been treated very well.'"

He added: "I was disappointed, obviously, gutted, because I loved it. As difficult as it was to keep your voice at that level, and all of that, I still loved it."

The 59-year-old Bayley, who was born in Birmingham, recorded two studio albums with IRON MAIDEN — "The X Factor" and "Virtual XI" — before Bruce returned to the group. The MAIDEN albums he appeared on sold considerably less than the band's prior releases and were their lowest-charting titles in the group's home country since 1981's "Killers".

Since leaving IRON MAIDEN in 1999, Bayley has released a number of albums, including several under the moniker BLAZE and more than a handful under his own name. He also appeared on 2012's "Wolfsbane Saves The World", the first album of new material by WOLFSBANE since the group's self-titled 1994 effort, and this year's "Genius".

Blaze's latest solo album, "War Within Me", came out in April 2021. All songs were written and produced by Blaze and guitarist Christopher Appleton.