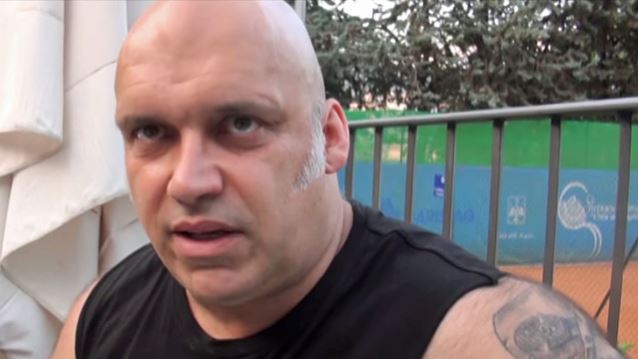 BLAZE BAYLEY: 'I Found My True Voice And My Identity When I Was Working In IRON MAIDEN'

British heavy metal vocalist Blaze Bayley (IRON MAIDEN, WOLFSBANE) was interviewed at this year's edition of the Blues Sotto Le Stelle festival on August 5 in L'Aquila, Italy. You can now watch the chat below.

As previously reported, Bayley has started to create his eighth, and he hopes, his greatest ever studio album. For the first time he wants to offer his fans an insight into the creative part of this process.

Writing this project started in March 2015. It is an album based on a science fiction story that Blaze is writing. He is still in the early stages of putting together the huge concept for this studio effort, so he felt it would be a right time to give his fans the opportunity to get involved.

When pre-orders start on September 1, fans will have the opportunity to opt in on an exclusive membership. As members, they will receive exclusive items and monthly e-mail updates on the new album. These monthly updates will contain information on the development of the artwork, the album and songtitles, videos of writing and recording sessions and rehearsals, and interviews with the musicians involved. When the album is released in March 2016, the members will also receive a printed magazine and a "making-of" DVD. These items will be created by Blaze for the exclusive members to celebrate the journey he has taken with them. Blaze will also give those fans a chance to talk with him during this process. For a few hours each month, he will be available for personal calls with the members to discuss the progress of the album and any other questions those fans may have. Some lucky fans will even have their voices on the album! Fans that are ultimate members will be able to take part in an exclusive competition. The winners' voices will be a part of the dream song on the album.

More details on the pre-order packages can be found at www.blazebayley.net. The pre-orders for the new album start on September 1 at 8 p.m. U.K. time.

The singer's latest studio album, "The King Of Metal", was released in March 2012.