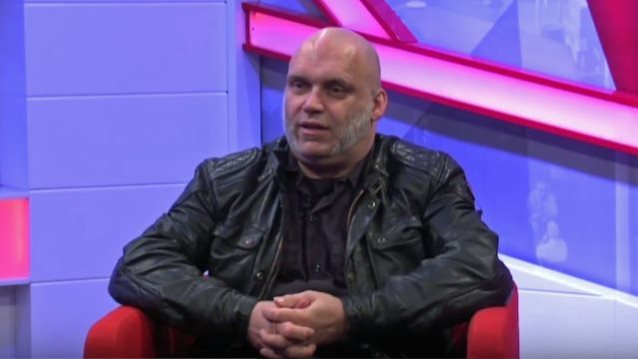 British heavy metal vocalist Blaze Bayley (IRON MAIDEN, WOLFSBANE) was recently interviewed by Malta's One News. You can now watch the chat below.

Speaking about his disappointment over the way he was fired from IRON MAIDEN in 1999, Blaze said: "I think what I look is that I thought I would get a chance to do a third album [with MAIDEN] with many of the song ideas that I'd written and collaborate with the guys. And what I did was I took those ideas and I made my first album, my solo album, which is [2000's] 'Silicon Messiah'. And though it's taken a very long time, now, with this trilogy that I'm doing [right now], the first 'Infinite Entanglement' [2016], this one, 'Endure And Survive' [2017], is the second album, it just seems to be taking off. The imagination of fans around the world seems to have been caught and people are really getting into the idea. And this is the first time for so many years I've been able to come to Malta, and I'd really love it if I could make it a part of my regular world tour."

Blaze's ninth solo album, "Endure And Survive", will be released on March 3 via Blaze Bayley Recording. The disc was recorded at Birmingham, England's Robannas Studios and said to be "an exciting and enthralling sequel" to his 2016 release "Infinite Entanglement", which was the first of a trilogy of releases following a sci-fi concept and storyline.

"Endure And Survive" will be accompanied by a world tour totalling some 120 shows. The European leg of the tour takes place principally between February and June 2017. After a small number of summer shows, Blaze will then go to the United States and Canada during August-September. It's also planned to take the tour to Latin America in 2018.

The spectacular album artwork has been completed by Andreas Sandberg, with additional images from Christopher Steenstrup who is also working on a Blaze Bayley video game.