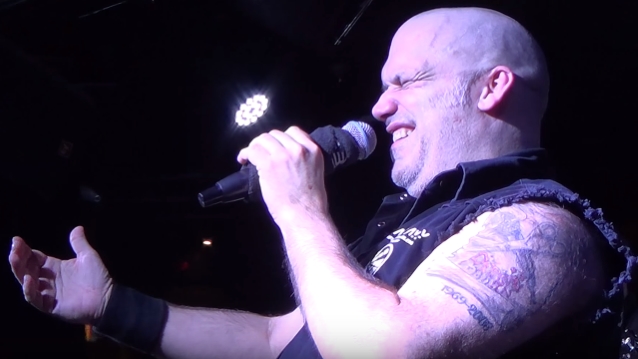 Former IRON MAIDEN vocalist Blaze Bayley (BLAZE, WOLFSBANE) recently appeared on the "Talking Maiden" podcast. The full conversation can be streamed below (interview begins at the 24:45 mark). A few excerpts follow (as transcribed by BLABBERMOUTH.NET).

On the fact that IRON MAIDEN has been performing two songs from his time with the group during its "Legacy Of The Beast" tour:

Blaze: "I'm so proud. Bruce [Dickinson] is one of the hero singers of my generation and a hallmark voice in heavy metal — one of the legendary voices. For Bruce to sing those songs and do them so well, it's absolutely fantastic. It's nice to feel that my small part of the story of MAIDEN is a small but important part — it signifies a change as MAIDEN go then towards the more progressive side of songwriting and music. You can tell from the two albums I'm involved with that there's a change happening. I'm very proud of it... I know there are still a lot of people that absolutely hate me from that era, and I see that as a good thing because it's a strong emotional reaction. I'm an emotional singer — I sing with my heart and soul, and I put 100 percent of that into everything I do — so if some people hate me, it must mean that some people love me. I'm very, very lucky to be living my dream 25 years after I joined IRON MAIDEN. I'm a professional singer making my own records with my own tiny record company and doing my own thing. I'm an underground artist, and I manage to make a living with my music, my songwriting and my singing. I'm very, very lucky. It's something that I'm very proud of, to be a part of that legacy with IRON MAIDEN."

Blaze: "There's a lot of great music on 'The X Factor', and I have those songs in my set list occasionally. I'll always have one song from 'The X Factor' and one song from 'Virtual XI' in the Blaze Bayley set list that I do now... A lot of it is the time in our life that we get an album. I think there is a darkness and an emotional intensity on 'The X Factor' album in particular, and many people that may have been going through difficult times or challenging times in their life could identify with those lyrics. Of course, there's so many great melodies and so much great music on those albums. I think people identify with that, and it just stays with you."

On whether he's ever had any "harsh words" with Dickinson:

Blaze: "I think Bruce got to a time in his life where he had to have a big change. It's a huge job, and it is all-consuming. He needed that change in his life, and he had to do it, I think, for his own mental health and sanity, that was the best decision for Bruce. Of course, that gave me an incredible opportunity, and I learned so much. I found my true voice when I was in IRON MAIDEN for my singing. Nothing that I've recorded or performed or written after MAIDEN has been anything like what I did before, because I learned so much from Steve Harris and the guys about songwriting and about music and about singing. Every single step of the way, I had support from Bruce Dickinson. He sent me a good-luck package full of beer with a nice card. He went to all the trouble of painting a brick yellow and sent it to me for my first big gig in London with MAIDEN, saying, 'I wish you the absolute very best with MAIDEN.' Post-MAIDEN, we've met each other several times. When he had his own radio show, he invited me on the show, played my music and he's helped me out using his simulators at his business — his aircraft pilot-training business, he let me make a video there. He's been a big supporter, and I think when you put Paul [Di'Anno] and Bruce and me together, we are three people in the world who know just how challenging that job is to be the frontman of IRON MAIDEN. There's just a knowing look between me and Bruce when we see each other. It's not easy — it's a huge, huge job. It's nice that we've been able to have that relationship. There's absolutely no animosity, and there never has been, between Bruce and me. There's never been any animosity between me and any of the members of IRON MAIDEN. Really, not a regret but a chance I wish I'd had, I would have loved to write a song with Adrian Smith. I wrote with Dave Murray and Janick Gers, and of course, a lot of work with Steve Harris, but I never had the opportunity to write with Adrian, because he was never in the band at the same time as me."

On Harris's recent praise of his two albums with MAIDEN:

Blaze: "I'm very proud of them as well. It was a lot of work, and Steve and I worked very, very closely together. He taught me a lot about writing. Everything on 'Infinite Entanglement' and the way that it is — the arrangements that I've been able to do — it's a huge reflection of the work that I did with Steve Harris. Everything that I learned on the 'Silicon Messiah' album, I knew when I made that album because of working with MAIDEN and the way that they arranged things and did things, I knew I wanted a certain sound, and more than that, I think Steve Harris gave me the belief in myself that I could actually make the 'Silicon Messiah' album and I could achieve that and that I could make a good album. Before that time, it always felt as if I'd written a good song, I'd had good luck. After IRON MAIDEN, if I want a good song, it's a bit of inspiration and a lot of hard work, and it's crafted... On 'Infinite Entanglement', I think all of that confidence, all of those lessons, everything came together to really show what I'm capable of. I think it's the confidence that Steve Harris gave me writing with him specifically, and learning how to find these other parts of my singing voice."

On his upcoming festival appearances:

Blaze: "At some summer festivals, there will be an anniversary set of 25 years since I joined IRON MAIDEN, and I'll be doing a big set of just my songs from 'X Factor' and 'Virtual XI'. I'm calling it the '25 Tour' to celebrate those 25 years, because they've been such a big, such a huge thing in my life and I wanted to make it something positive... I'm taking two guitarists with me, so we'll have the full, proper thing. The only difference will be that some of those songs, I do arrange in my own way, so the way that I play them is not identical to the albums. I play them my own way, in my own style as Blaze Bayley. The songs are essentially the same, and the hardcore fans will maybe notice a difference. Most fans, when I've played these songs before, they've just enjoyed them, and nobody's ever said, 'Oh, that sounds different.'"

On his forthcoming live DVD:

Blaze: "I recorded the full set at the end of the tour in France, near Nancy. [Guitarist] Chris Appleton recorded the sound, and he's mixing that right now. We've edited together the DVD, and we think it's pretty good. It's not too flashy. It's a representation of what it's like to be at a Blaze Bayley gig. It's not about flashing lights. There's no programming. Everything's 100 percent live music, and it's about us and our connection with the fans."

"The Redemption Of William Black", Bayley's tenth solo album, was released in March. It was co-written with and co-produced by Chris Appleton of fellow British metal band ABSOLVA, who is also lead guitarist and backing vocalist in Blaze's band for recording and touring, together with his ABSOLVA bandmates Martin McNee (drums) and Karl Schramm (bass and backing vocals).