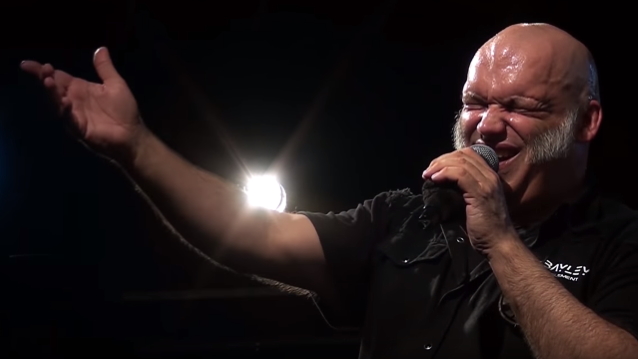 British heavy metal vocalist Blaze Bayley, who fronted IRON MAIDEN more than 20 years ago, will release a new studio album in March 2021. Blaze and guitarist Chris Appleton have already putting together new material and early reports from the singer are that the results so far are "very exciting."

In April, Blaze will release "Live In Czech", a live album and DVD recorded last fall at the Melodka venue in Brno, Czech Republic. The theme of the tour followed on from Blaze's "Infinite Entanglement" trilogy of albums and the setlist particularly featured some of the more epic songs from the trilogy which hadn't previously been included in concert setlists. The set also contained a selection of songs from his albums with IRON MAIDEN during the 1990s.

In September, Blaze plans to reissue his 2002 album "Tenth Dimension" with new packaging and upgraded artwork. There will also be a vinyl version for the first time. To go with that reissue, Blaze will embark on a European tour in September-November, featuring a "Tenth Dimension" setlist.

Welcome 2020! Having said goodbye to another year and in thanking you for all the wonderful support, we also take this opportunity to welcome you to 2020. Firstly, we wish you a very happy and healthy new year, and next take a moment to tell you about our plans for this year and a little further. Live in Czech As you know, in April we release 'Live in Czech' which is the concluding piece of the 'Infinite Entanglement' trilogy, featuring the setlist played on the 'Tour of the Eagle Spirit', including some of the more epic tracks like 'Eagle Spirit' and 'Together We Can Move the Sun'. Thank you so much to all of you that have pre-ordered 'Live in Czech' so far. New full metal studio album Apart from our Brazil Tour this month, Burr Fest in March and summer festivals, we will concentrate on song-writing for a brand new full metal album planned for release in March 2021. As you can see below, Blaze and Chris have already started and early reports from Blaze are that the results so far are very exciting. Tenth Dimension So, what's happening in the later part of 2020? We're thrilled to say that in September we plan to re-issue the 'Tenth Dimension' album which will be re-packaged with upgraded artwork and we'll also release for the first time a vinyl version. In many ways that album is a prequel to the trilogy and so it's interesting to explore that more deeply. To go with that re-issue we are soon to announce a European Tour for September-October, and a UK Tour for November, both featuring a 'Tenth Dimension' setlist. So, that gives you a clear idea of where we're heading with our plans for 2020-2021.... April 2020 : 'Live in Czech' CD and DVD September 2020 : 'Tenth Dimension' CD re-issue and vinyl LP March 2021 : new full metal studio album Thank you once again for making all this even possible. We'll bring you more news as soon as we can. #blazebayley #britishmetal @iron maiden #wolfsbane #liveinczech #tenthdimension #newalbum