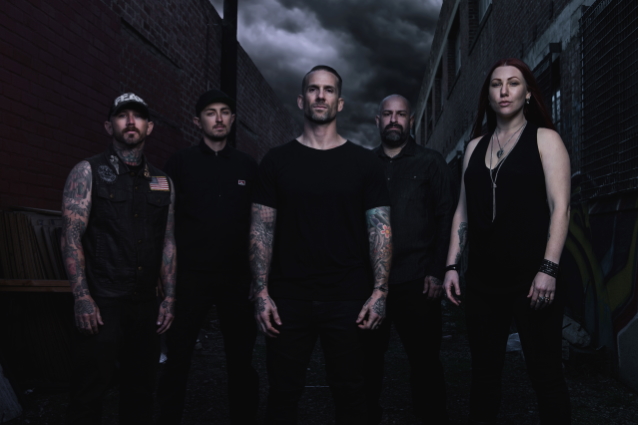 BLEEDING THROUGH Frontman: 'We've Never Held Back From Any Sort Of Emotional Outlet With Our Music'

Alex Haber of Heavy New York conducted an interview with frontman Brandan Schieppati of California metallers BLEEDING THROUGH prior to the band's August 17 concert at The Kingsland in Brooklyn, New York. You can watch the entire chat below. A few excerpts follow (transcribed by BLABBERMOUTH.NET).

On whether he considers BLEEDING THROUGH's 2018 comeback album, "Love Will Kill All" to be a "fresh start" for the band:

On whether BLEEDING THROUGH takes a new approach to every studio album:

Brandan: "We do. We try to always keep everything fresh. We always want to maintain what we do and what we think we do. We do feel like an obligation to our fanbase to put a record out there that's going to make them proud of being a fan of our band. We do think of that. Whereas bands sometimes say, 'Oh, we really don't care. We write this music for ourselves.' Yeah, we write this music for ourselves but at the same time, a lot of this is because of the scene that we play for. We owe a lot to the scene and the support we've gotten from people. We want to give them a record that they can be stoked on."

On whether BLEEDING THROUGH has ever held back on their emotions through their music:

Brandan: "Not at all. We've never held back from any sort of emotional outlet with our music. We've always just said from day one, we want to do our own thing. Whether this song feels this way or this way, whatever feels right is what we're going to do. We've never written a song to a certain formula or something that we may think is going to get us bigger or whatever. It's like we write music to our emotions. We write music solely to write music. It's an honor to have people all over the world want to see that music and listen to that music. It gives us the opportunity to still get to travel and play fucking live shows. Dude, 20 years into doing this band, if you can still do that, it's pretty fucking awesome."

On his transition from playing guitar in fellow Orange County, California band EIGHTEEN VISIONS to becoming frontman in BLEEDING THROUGH:

Brandan: "My mind frame with EIGHTEEN VISIONS was like 'Let's write music that will scare people. Let's write aggressive stuff.' Then when I saw the direction of EIGHTEEN VISIONS was going away from the aggression and more toward like a groovier rock sound, for me, and at the same time BLEEDING THROUGH was starting, music was such an emotional outlet for me. I was such 'I need to get this out on stage.' I found BLEEDING THROUGH was giving me a little bit more of that. That's why I decided to part ways with one and do the other solely. For me, music has always come from the same emotion. People in BLEEDING THROUGH share that same emotional drive and EIGHTEEN VISIONS didn't. That was it."

On whether his love of bodybuilding impacts his onstage performances as a vocalist:

Brandan: "I know that the same thing I get out of working out is the same thing I get out of being onstage. It's a euphoric, emotional release. Whatever bullshit I'm going through that day, stresses and this and that, when you're on stage, you scream that into a microphone. When I'm in the gym, I put that on a fucking barbell and I put it on my back and I lift it off of me. In that regard, I get the same thing. I don't know if there's anything — getting good shape is getting in good shape. You're always going to play better on stage if you're in better shape. You're always going to be able to sing longer if you're in better shape, but at the same time, I don't think there's any science that correlates fitness and music together. Some of the fucking gnarliest stage performers I've ever seen are out-of-gas human beings."

"Love Will Kill All" was released in May 2018 via SharpTone Records.