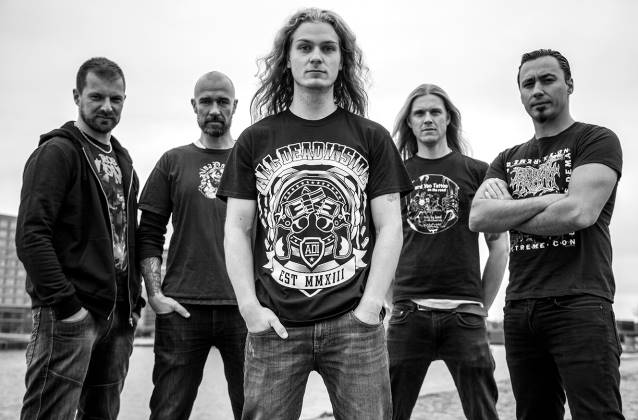 "Death Sub Zero", the second music video from BLOOD EAGLE, the Danish death metal band featuring members of VOLBEAT, MNEMIC, HATESPHERE, ILLDISPOSED and RAUNCHY, can be seen below. The clip was filmed at the group's debut show at the 2013 edition of the Aalborg Metal Festival, which was held November 7-9 at Studenterhuset in Aalborg, Denmark.

Commented the band: "Since our songs are not up yet for free download, we thought it would be good to promote our brand new band with another video clip.

"We've seen the positive feedback we received for our short punk-death-grind-ish video for 'Kill Your Tyrants', and we thought why not go down that road again.

"We know some of you have already heard this song at our Facebook page, but many still haven't and therefore why not also show it while we are at it.

"More is coming and heading your way, and we promise to have some Christmas presents as well!"

BLOOD EAGLE's name — which represents the method of torture and execution in Nordic mythology, performed by cutting the ribs of the victim by the spine, breaking the ribs so they resembled blood-stained wings — was chosen due to the members' Scandinavian roots,.