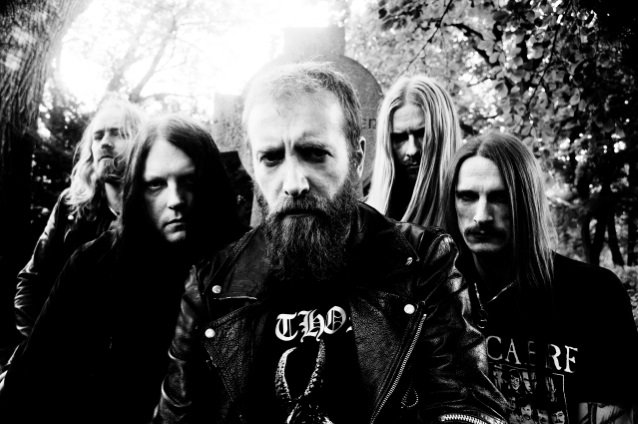 Due to unforeseen and uncontrollable circumstances involving complications with the U.S. visa process, Swedish/British death metal supergroup BLOODBATH, which features in its ranks KATATONIA's Jonas Renkse and Anders Nyström, along with OPETH's Martin Axenrot and PARADISE LOST's Nick Holmes, has been forced to postpone their previously announced North American tour dates. The band's excursion was set to begin this week and included performances at Maryland Deathfest and Modified Ghost festival. The tour will be rescheduled for a later date.

BLOODBATH says in a statement: "It's with an immense mix of anger, frustration and sadness that we're forced to announce the following news: We will not be flying out tomorrow to begin our first North American tour we all so much looked forward to playing. We've been rehearsing and preparing this for months and our gear and bags are packed ready by the doorstep, but sadly due to the U.S. immigration and embassy making a mistake with our visas, they couldn't fix it in time and reissue it.

"We hoped we never would have to make this kind of announcement. We were still trusting they would issue it in time to the very bitter end, but now with less than 24 hours to go, we have to accept our fate; it ain't gonna happen.

"We're so sorry for all of you who bought a ticket and made plans to come see BLOODBATH! On any kind of positive note, we WILL be rescheduling (nothing else is acceptable!) and prepare to play the tour as soon as possible. More news on refunds etc. ASAP."

Holmes made his BLOODBATH debut on "Grand Morbid Funeral", which was released in November 2014 via Peaceville. The effort featured guest appearances by Chris Reifert and Eric Cutler from AUTOPSY.

"Grand Morbid Funeral" was recorded once again at Ghost Ward Studios and the City Of Glass Studios in Stockholm, and mixed by David Castillo.

Formed in 1998 with a mutual fascination for horror and the glory days of death metal (especially the old Florida and Stockholm "Sunlight" scenes),BLOODBATH has remained a leading light of extreme metal since its "Breeding Death" EP was unleashed back in 2000, and a formidable force for 20 years, further cemented by the devastating — and most successful album to date — "The Fathomless Mastery" in 2008.