In celebration of the 40th anniversary of its widely celebrated album "Agents Of Fortune", BLUE ÖYSTER CULT performed the seminal album in its glorious entirety at an exclusive concert for the Audience Music Network on Monday April 18, 2016 at Red Studios in Hollywood, California in front of an intimate audience of invited guests. The performance was recorded by an army of cameramen for a DirectTV special, that is now being released on CD/DVD, Blu-ray, and vinyl on March 6 via Frontiers Music Srl.

The intense creative vision of BÖC's original core duo of vocalist and lead guitarist Donald "Buck Dharma" Roeser, and vocalist and rhythm guitarist Eric Bloom are complemented by Richie Castellano on guitar and keyboards, and the longtime rhythm section comprised of bass guitarist Kasim Sulton, and drummer Jules Radino. As a special guest, founding member Albert Bouchard appears on guitar, percussion, and vocals on selected tracks, which was a real treat for longtime fans of the band.

BLUE ÖYSTER CULT's fourth album, "Agents Of Fortune" was originally released in 1976 and went on to achieve platinum sales status on the strength of songs such as "(Don't Fear) The Reaper", which was easily the band's biggest hit. Tinged with a more commercial sound that preserves the band's heavy metal base, while exploring new and varied musical forms, "Agents Of Fortune" was the band's breakthrough album. Nothing they had produced previously prepared listeners for the level of sophistication the group found on "Agents Of Fortune" and it's both an essential document of the band and an iconic release of '70s rock in general.

Also on March 6, Frontiers will reissue "Heaven Forbid", the band's thirteenth studio album, in all territories outside North and South America. Originally released on March 24, 1998 in Europe, it was the band's first full studio album containing original material since 1988's "Imaginos". Science fiction author John Shirley contributed heavily to the album, writing lyrics for all except two original songs. A live version of the track "In Thee" was included as well. "Heaven Forbid" is one classy slab of hard rock featuring intricate arrangements, provocative lyrics, and spine-tingling guitar solos. The rockers sound in top form on this full blown (at the time) return album, whether on the thrash-y and menacing opener "See You In Black", the sci-fi epic "X-Ray Eyes", or the mythical and atmospheric "Harvest Moon". 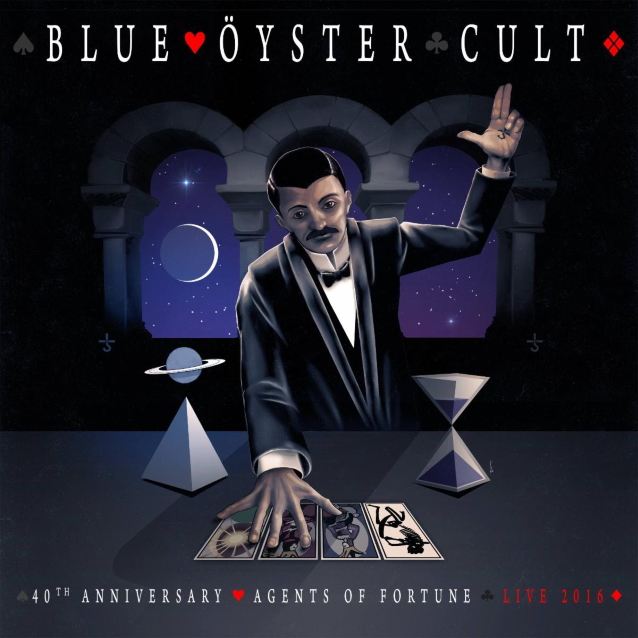