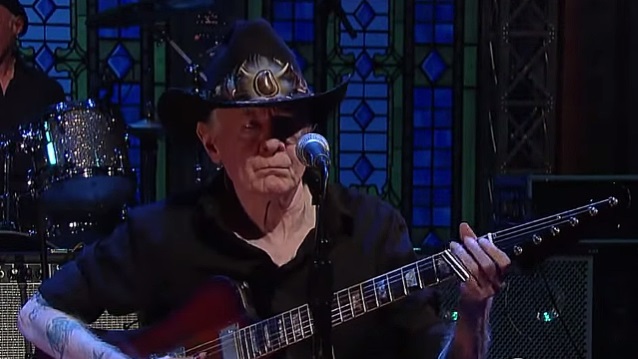 Blues legend Johnny Winter died yesterday (Wednesday, July 16) at his hotel room in Zurich, Switzerland at the age of 70. His wife, family and bandmates are all saddened by the loss of their loved one and one of the world's finest guitarists.

According to the Chicago Tribune, there was no indication of third-party involvement, and early signs pointed to a medically related incident.

A prosecutor has ordered an autopsy because the cause of death is unclear.

The news of Winter's death was first reported by American Blues Scene and Jenda Derringer, wife of Winter's former bandmate Rick Derringer. Jendawrote on Facebook: "[Johnny] was not in good health and was very frail and weak."

Johnny — elder brother of fellow music legend Edgar Winter — has always been one of the most respected singers and guitar players in rock and the clear link between British blues-rock and American Southern rock. Throughout the '70s and '80s, Johnny was the unofficial torch-bearer for the blues, championing and aiding the careers of his idols like Muddy Waters and John Lee Hooker.

Former GUNS N' ROSES drummer Matt Sorum paid tribute to Johnny Winter via Twitter. He wrote: "I've just become close with Edgar and I'm so sad for him and his family. They had plans to tour."

The Blues magazine editor Ed Mitchell said this morning: "It's no secret that Johnny has battled with ill health for many years — but he seemed to transcend that struggle when he played live. No one's slide tone was as sweet, searing, stinging or fiery. Johnny Winter blazing away on a Gibson Firebird is an iconic blues image.

"He was the greatest slide blues guitarist that ever lived. We'll always have him to thank for pulling Muddy Waters out of his funk in the Seventies and helping him record some of his greatest work: 'Hard Again', 'I'm Ready' and 'King Bee'. All essential."

Speaking to JournalStar.com last month, Johnny Winter said: "When I was about 12, I knew I wanted to be a musician. The blues had so much emotion and so much feeling; if you don't have that, you're not going to be good at it."

Asked if there was anything left for him to accomplish, Winter said: "I've never won a Grammy on my own — I'd like to do that. The ones I've got have been with Muddy. I've been nominated a lot of times but never won."

Regarding what he would like his legacy to be, Winter said: "I just hope I'm remembered as a good blues musician."

Winter's big breakthrough came in 1968 when Rolling Stone writers Larry Sepulvado and John Burks featured him in a piece on the Texas Music scene, which prompted a bidding war among labels that Columbia eventually won.

Winter remained active up until his death and was scheduled to release a new studio album, "Step Back", on September 2 via Megaforce Records. The follow-up to 2011's "Roots" features a host of special guests, including Eric Clapton, Ben Harper, Billy Gibbons, Joe Perry, Dr. John, Leslie West, Brian Setzer and Joe Bonnamassa.

"As the great blues historian Robert Palmer once bluntly stated, 'Texas's blues pedigree is unsurpassed," writes Brad Tolinski in the liner notes for the recent career-retrospective boxed set "Johnny Winter: True To The Blues". "But of all of these bright lights, perhaps the most electrifying, exotic and resilient Texas export is a snowy white guitarist from Beaumont, whose truth-is-stranger-than-fiction given name is Winter. For well over five decades, John Dawson 'Johnny' Winter III has produced and played on some of the most exciting blues and rock recordings in the history of both genres. His absolute command of traditional music has earned him the respect of serious musicologists, while his tremendous agility, wicked speed and full-tilt aggression on the electric guitar and acoustic bottleneck has won over several generations of younger rock players looking to cop some the fastest and hottest licks ever committed to tape."