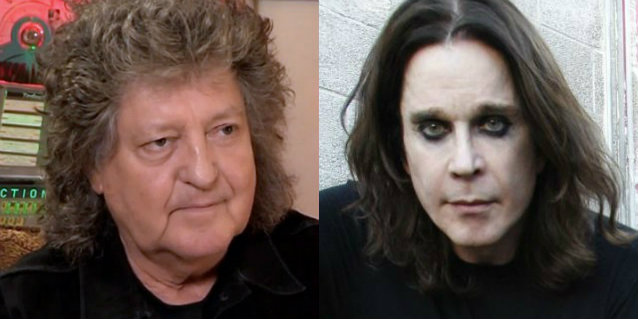 Former Ozzy Osbourne bassist Bob Daisley's recent lawsuit against the singer over unpaid royalties has been dismissed, according to Courthouse News Service. U.S. District Judge Christina Snyder concluded that Daisley's claims that Osbourne used a sham company, Blizzard Music Limited, to withhold royalty income from him are matters that should be settled through arbitration.

The dispute centers around the royalties for Ozzy's 1980 "Blizzard Of Ozz" and 1981 "Diary Of A Madman" albums, both of which featured Daisley's playing along with songwriting contributions. Daisley told journalist Joel Gausten last year that while he has received performance and publishing royalties for the songs, he has not received his share of what are known as synchronization fees, or "sync fees," which writers earn from the use of a song in an ad, TV show, movie, video game or other such media.

Daisley's lawsuit stated that the firm that conducted an audit at his request in 2014 estimated that at least $2 million in royalty income had been withheld, although it could not determine a precise amount.

He also explained last year that Ozzy's publishing company "has been taking a higher percentage off the top" than his contract states, claiming, "The Osbournes have been taking 25 percent rather than the 10 percent I agreed to."

Ozzy issued a statement on the lawsuit at the time it was filed, saying that Daisley had routinely been royalties totaling in the "millions of dollars" over the past 36 years, adding that "Mr. Daisley has audited Blizzard Music accounts over the years using several different auditing firms who found no discrepancies. He has previously filed lawsuits in the U.K. and the U.S. and has lost on each occasion.

This is the second time that Daisley took legal action against the singer. Daisley and drummer Lee Kerslake, who also played on both records, filed suit against Ozzy in the early 2000s for unpaid performance royalties. Their suit was dismissed in 2002.