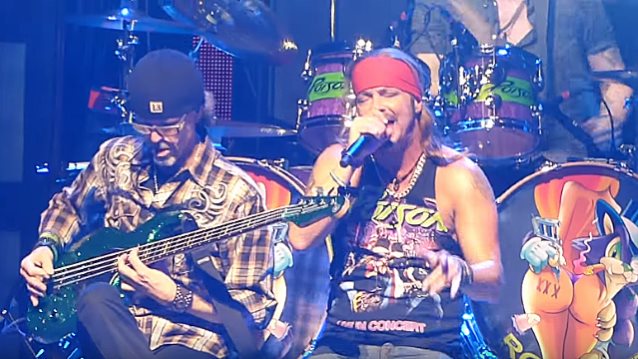 POISON bassist Bobby Dall has admitted to Rolling Stone that he was upset when singer Bret Michaels first started going on the road as a solo artist and playing POISON's songs. "Yeah, if I'm being honest," said Dall, "I think it'd bother anybody. And if anybody in the band tells you otherwise, I'd think they're lying." POISON guitarist C.C. DeVille took a slightly different stance, telling the magazine: "I would like to be out there as well, but, no, it does not piss me off. Bret just loves to work. He likes to have ten things going at once."

For his part, Michaels said: "There's no malicious reason I do it. It's just in addition to what I do with POISON."

POISON's reunited original lineup kicked off its North American tour with DEF LEPPARD on April 8 at the SNHU Arena in Manchester, New Hampshire. The trek will wrap on June 25 in Indianapolis, Indiana.

POISON hadn't done any major touring since taking part in the 2012 "Rock Of Ages" trek with DEF LEPPARD and LITA FORD.

"If it takes me four years to get Bret to agree to play a tour," Dall told Rolling Stone, "you never know if there's going to be another one. It's gotten so hard to just get it done."

Back in 2015, Dall, DeVille and fellow POISON member Rikki Rockett (drums),plus vocalist/rhythm guitarist Brandon Gibbs (CHEAP THRILL, DEVIL CITY ANGELS),played several shows as THE SPECIAL GUESTS in what was widely perceived as a not-so-subtle message to Michaels that they weren't willing to remain completely inactive while he pursued a solo career. Rikki later told "Rock Talk With Mitch Lafon": "Why should we sit home while Bret does things?' You know what I mean? That was the only message: 'Hey, Bret, we're not gonna sit around either.' It wasn't like, 'We're replacing you, Bret,' but it was kind of like, 'We're not gonna just sit on our thumbs either.' That's more or less what it's about… And honestly, we didn't do it as a message to Bret, but that message, I'm sure, [came across]… And the fans actually really liked it. Brandon did an awesome job."