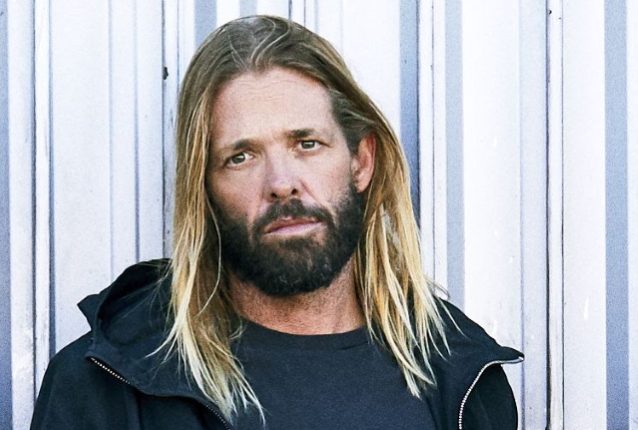 According to Daily Mail, the casket carrying the body of FOO FIGHTERS drummer Taylor Hawkins, who died last Friday at a hotel in Colombia, was flown back to the U.S. on Tuesday (March 29).

Daily Mail published images from the El Dorado International Airport in Bogota of the casket being loaded onto a chartered Boeing 757 plane.

FOO FIGHTERS' tour manager Gus Brandt reportedly remained in Colombia after the surviving members of the band returned to the U.S. a day after the 50-year-old musician was found dead at the Four Seasons Casa Medina.

On Tuesday, FOO FIGHTERS announced that they were canceling all of their previously announced concerts as a result of Hawkins's death.

"It is with great sadness that FOO FIGHTERS confirm the cancellation of all upcoming tour dates in light of the staggering loss of our brother Taylor Hawkins," the band said in a statement. "We're sorry for and share in the disappointment that we won't be seeing one another as planned. Instead, let's take this time to grieve, to heal, to pull our loved ones close, and to appreciate all the music and memories we've made together. With Love, FOO FIGHTERS."

The FOO FIGHTERS were scheduled to perform at the Grammy Awards in Las Vegas this Sunday (April 3),where they are nominated for three awards.

An official cause of death for Hawkins hasn't yet been released. But on Saturday, Colombia's attorney general's office released a preliminary toxicology report, saying that medical examiners found evidence of 10 types of substances in Hawkins's body, including opioids, benzodiazepines, marijuana and antidepressants.