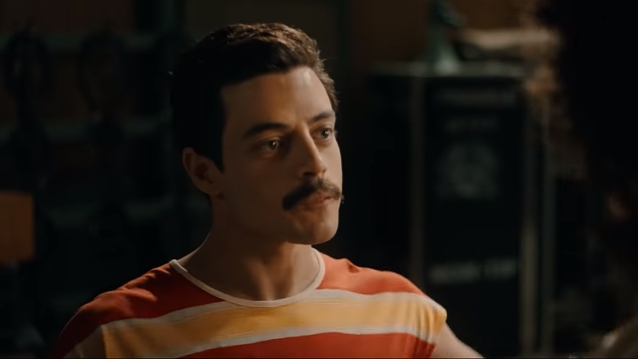 'Bohemian Rhapsody' To Be Released In China, Reportedly Without Any Scenes Of FREDDIE MERCURY Kissing Other Men

According to The Hollywood Reporter, "Bohemian Rhapsody" will be shown in China without any scenes of a homosexual nature.

The QUEEN biopic tells the story of the legendary British rock band and its frontman Freddie Mercury, who was a gay man.

Given China's strict policy on LGBTQ representation in entertainment, scenes featuring Mercury kissing other male characters — constituting at least one minute of the film's runtime — are expected to be censored.

The announcement of "Bohemian Rhapsody"'s theatrical release in China comes just a couple of days after the country's censorship of actor Rami Malek's Academy Awards speech.

Malek, who won the "Best Actor" Oscar for his portrayal of the late singer in the film, had a LGBT reference censored by Mango TV, one of China's most popular channels and one of only two networks that live-streamed the Academy Awards telecast in China.

While accepting the prize, Malek said: "Listen, we made a film about a gay man, an immigrant, who lived his life unapologetically himself, and the fact that I'm celebrating him and his story here tonight is proof that we're longing for stories like this." Mango TV's subtitles removed "gay man" and replaced it with "special group."

"Bohemian Rhapsody" will receive a limited released in China next month by the National Alliance of Arthouse Cinemas (NAAC),a public-private initiative run by the state-supported China Film Archive and a consortium of commercial theater chains.