"Sound Of Survival", a new song from Dutch metallic hardcore heroes BORN FROM PAIN, is available for download at this location. The track comes off the group's new album, "Survival", which is scheduled for release in Europe on November 3 via Metal Blade Records (except Germany, Austria, Switzerland and Italy, where it will arrive on October 31). The CD is said to be "musically [as] uncompromising as ever with an own twist in groove, melody, heaviness and harshness. Lyrically, [it is] more than ever making a critical and uncompromising stand concerning the state of the world today."

Commented singer Rob Franssen: "We are very happy the way the album turned out. We have invested a lot of time and energy in it and we are very pleased with the result. We feel we have integrated the new vocal sound into our music pretty well and concentrated especially on developing our sound further without losing our usual musical trademarks like heaviness, aggression and groove. We feel this is our best work easily up until now."

He continued: "We've taken a step further what our critical view on the ruling power structures is concerned, and thus the state of the World of today. We feel it is important to have a voice in times like these where the people are constantly lied to by ruling powers. Robbed of self-worth, pushed in the dirt and cheated out of their last lifesavings under the veil of lies. We feel it is important to look further than the 8 o' clock news, mainstream radio or the online news agencies. We are trying to be critical and create awareness that there is more than meets the eye and people should get informed and look beyond to what they tell us is obvious. We are actively pushing for a critical agenda here and are not accepting our current situation. It is time to have a voice before it's too late. Look for truth!"

BORN FROM PAIN recently announced the addition of bassist Andries Beckers (THE SETUP) to the group's ranks.

The band's third album, "War", was released in 2006 through Metal Blade Records. The CD was produced by Tue Madsen (CATARACT, SICK OF IT ALL, KATAKLYSM, HIMSA, HATESPHERE) at Antfarm studio in Denmark and features guest appearances by Jan-Chris de Joeijer (GOREFEST), Lou Koller (SICK OF IT ALL) and HATESPHERE guitarist Peter "Pepe" Lyse Hansen. 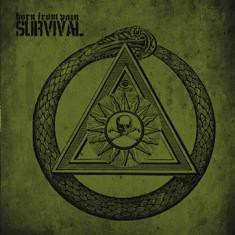 BORN FROM PAIN performing at Hellfest in Clisson, France on June 20, 2008 (clip uploaded by "bulldozer72"):