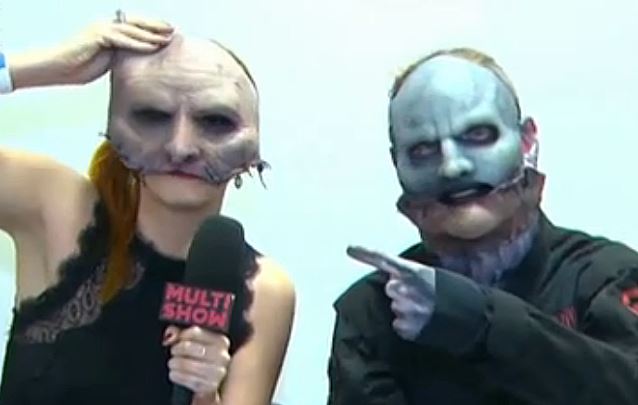 Brazilian TV presenter Titi Müller of Globo.com's Multishow got a chance to briefly put on the top part of SLIPKNOT singer Corey Taylor's mask during a live interview conducted prior to the band's September 25 performance at the Rock In Rio festival in Rio De Janeiro, Brazil. Check out the footage at this location.

Taylor was asked in an interview with a Canadian radio station whether he thought SLIPKNOT would ever perform without its signature headgear. Taylor replied: "I think in a way we could, but I don't think we'd want to. I mean, I always think back to when KISS took the makeup off back in the '80s, and I know why they did it, because they kind of hit a wall and it was time to evolve for them. But for us, the masks always evolve, for the most part, and our look always evolves, and I think because we're constantly changing, we don't feel that pressure to take them off, because we allow ourselves to roll with the times and to change with the albums."

The band last year introduced new versions of its masks and Taylor told The Pulse Of Radio what inspired his. "I based the face off of the really great character actor, Richard Lynch," he said. "Basically I stole his face, so Richard, I'm sorry, I probably owe you a few bucks. But I thought it was cool. He's one of my favorite — 'cause he was in a lot of great horror movies and like sci-fi/fantasy movies and whatnot, and he just had a great, gnarly look."