Produced by Live Nation, the 35-city outing kicks off July 21 in St. Louis, Missouri at the Hollywood Casino Amphitheatre and will make stops in Detroit, Atlanta, Austin and more before wrapping September 25 in Salt Lake City, Utah at USANA Amphitheatre.

BREAKING BENJAMIN is continuing to tour in support of its sixth studio album, "Ember". The disc debuted at No. 3 on the Billboard 200 chart and has spawned off two No. 1 rock radio hits with recent singles "Red Cold River" and "Torn In Two", marking the band's eighth and ninth No. 1 singles to date.

In a recent interview with the Rock 100.5 The KATT radio station, BREAKING BENJAMIN frontman Benjamin Burnley said that "Ember" could very well be the group's heaviest release so far. "There's things that we have on all BREAKING BENJAMIN albums that are heavy, and I think we just a little bit more of that side of it on this album," he explained. "And there's really light things too — there's a song called 'The Dark Of You' that's really, really mellow and chill. But I think that it's just whatever the song calls for."

He continued: "These guys that I have [in the band] now, when I did 'Dark Before Dawn' [2015], which is the last album, I had that about 95 percent written when I got them onboard; I wrote that mostly on my hiatus — when I took that hiatus. And so when they came into the band, it was kind of already done. There was a few things that they contributed on, but for the most part, it was done. And 'Ember' is the first album that they were there from the very start — when there was no material — so they all contributed a lot more to it. There were songs that I don't even know how to play, 'cause I didn't write the music; I just wrote the vocals and the lyrics, and they helped with the lyrics too, and some of the melodies and all that. So I was really able to kind of just take a step back — gladfully, because I had done most of the work, if not all of the work, on all of the BREAKING BENJAMIN albums before. And I'm ready — I always was; I just didn't really have anybody that I was playing with that was like-minded writers."

Benjamin added: "I mean, I've always played with some really, really amazing musicians, but a musician and a writer are two totally different things, and we just didn't really mesh too well. These guys will send me an entire song that's done, with no vocals — and sometimes with vocals — but the whole thing is done, from the start to the finish, and all I have to do is either put my own lyrics or vocals on it, or whatever. And it's really awesome to just have that; I've never had that before — I've never heard a whole song. I've only heard, like, 'Here's this riff.' And all I would do is, I would have a song already, and the riff would be in the same… it would fit in there, if I just took mine out and put that in there, so that's what I used to do. I don't really consider that writing together; I just consider it taking a piece out and putting another piece in. So this time around, I think it's a little heavier, because that's where that music that they came up with sort of took me."

"Ember" was released in April 2018 via Hollywood Records.

BREAKING BENJAMIN will kick off 2019 with a North American headline arena tour next spring, starting on March 15 in Saginaw, Michigan. The tour will include support from SKILLET, ASKING ALEXANDRIA, UNDEROATH, FIGHT THE FURY and DIAMANTE on select dates. 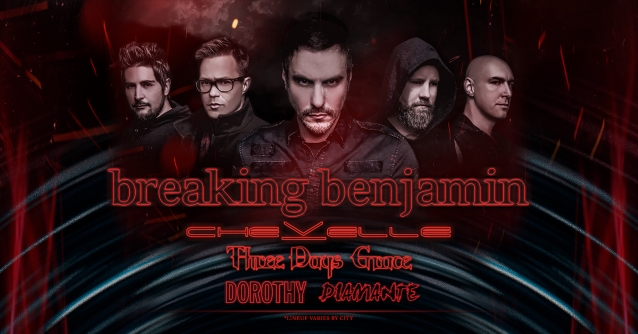