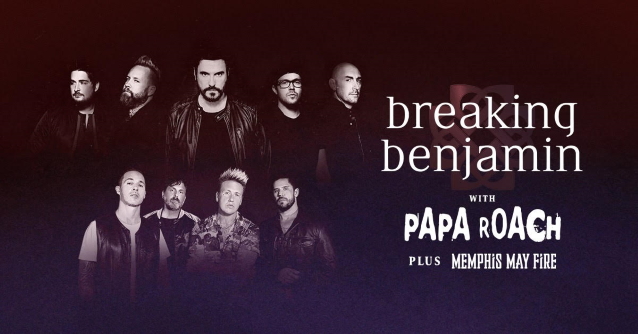 BREAKING BENJAMIN will team up with PAPA ROACH for a handful of dates later this summer. Also appearing on the bill will be MEMPHIS MAY FIRE.

The shows kick off in Gilford, New Hampshire on September 11 at the Bank of New Hampshire Pavilion, with stops in Columbus, Scranton and more, before wrapping up on September 22 at the Mountain Health Arena in Huntington, West Virginia.

Tickets are available to the general public starting on Friday, August 6 at 10 a.m. local time at BreakingBenjamin.com.

^ PAPA ROACH not on this date
* Not a Live Nation date

BREAKING BENJAMIN are no strangers to the upper echelons of the rock charts. Since bursting onto the scene with 2002's "Saturate", the band has amassed an impressive string of mainstream rock radio hits, with ten songs hitting #1, numerous platinum and multi-platinum songs and albums, 8.5 billion combined streams worldwide and a social imprint of over 6.5 million — a testament to the band's global influence and loyal fan base. Their most recent release, "Aurora", gave BREAKING BENJAMIN their 10th #1 song at rock radio with "Far Away ft. Scooter Ward". BREAKING BENJAMIN's last studio album, "Ember", debuted at #3 on the Billboard Top 200 and marked the multiplatinum band's fourth Top 5 debut on the Billboard Top 200, following 2015's #1 debut for "Dark Before Dawn" (gold), 2009's "Dear Agony" (platinum) at #4 and 2006's "Phobia" (platinum) at #2. "Ember" spun off two #1 hits at Active Rock Radio with "Red Cold River" and "Torn In Two". "Aurora" and "Ember" charted Top 10 across numerous countries worldwide and topping #1 charts across multiple genres, including Top Alternative Albums, Top Rock Albums, Top Hard Rock Albums and Top Digital Albums.

PAPA ROACH, the iconic California rock band, is kicking open the door to a new chapter of their career with the release of "Swerve", a high-octane, swagger-packed thrill ride featuring the outspoken frontman of FEVER 333, Jason Aalon Butler, and rising LA-based rapper Sueco. The track premiered Sunday night on the BBC Radio 1 "Rock Show With Daniel P. Carter" and is available now for streaming.

PAPA ROACH have been one of the leaders in alternative rock for 20 years and continue to impact that space with consistent, genre-bending releases, the latest being "Swerve". The two-time Grammy-nominated, platinum-selling band, who in 2020 celebrated 20 years since their debut album "Infest", have sold over 20 million records worldwide, garnered over two billion streams to date, and charted 20 Top 5 hit singles and eight #1 hit singles on three different radio formats (Active Rock, Alternative and Top 40), further solidifying PAPA ROACH as one of the most consistently successful rock bands of their era. 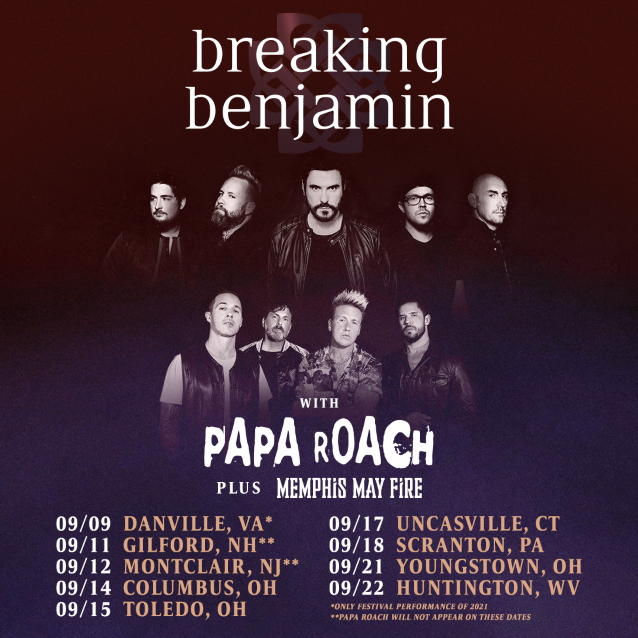