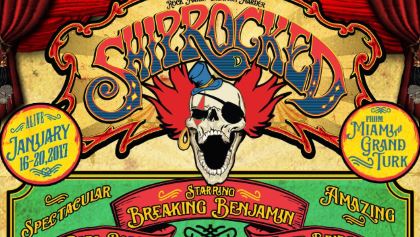 The initial band lineup has been announced for the eighth edition of ShipRocked, set for January 16-20, 2017 onboard Carnival Victory. Headliner BREAKING BENJAMIN will join PAPA ROACH, ALTER BRIDGE, SEVENDUST, POP EVIL, THE STOWAWAYS all-star band and more on The Ultimate Rock 'N' Roll Cruise as it sails from Miami, Florida to Grand Turk in the Turks & Caicos Islands.

ShipRocked 2017 presales are now sold out. Stateroom selection for those guests who made presale deposits will begin Wednesday, May 4 at noon EDT. All remaining staterooms for ShipRocked 2017 will go on sale to the general public on Tuesday, May 10 at noon EDT at ShipRocked.com.

"We are super exited to be the headliner for ShipRocked this year," says BREAKING BENJAMIN's Benjamin Burnley. "Thanks for rocking out with us!!!"

Echoes PAPA ROACH vocalist Jacoby Shaddix, "We're super stoked to come floating on a big boat with all our friends."

"I am beyond excited to rock ShipRocked again. I can't wait to do it this time with ALTER BRIDGE," adds ALTER BRIDGE's Mark Tremonti, a ShipRocked veteran with his own TREMONTI. "The last two times I've played have been amazing and I expect this year will be the best one yet."

To celebrate ShipRocked's new home onboard the Carnival Victory, guests are invited to vacation "Under The ShipRocked Big Top":

Plus the comedy of Big Jay Oakerson; D.J. Lippy Rage; The S.D.R. Sideshow; with ringmasters Kayla Riley of SiriusXM's Octane and Ralph Sutton of The Tour Bus Radio.

ShipRocked's own all-star band THE STOWAWAYS and its revolving cast of special guests will once again be pulling out all the stops with classic hits, unexpected surprises, and a roster of performers that can't be seen anywhere else.

ShipRocked producer Alan Koenig of ASK4 Entertainment says: "For our eighth anniversary, we're going bigger and better than ever before, upgrading our three-ringed floating circus to deliver a true rock star experience. We'll be taking our musical marvels onboard Carnival's Victory, sailing from Miami to stunning Grand Turk in Turks & Caicos."

Staterooms sold out over seven months in advance for ShipRocked 2016, which featured performances from FIVE FINGER DEATH PUNCH, along with SEETHER, HALESTORM, HELLYEAH and more, with close to 3,000 guests onboard. ShipRocked 2016 also marked the debut of THE STOWAWAYS. The 2016 edition of THE STOWAWAYS featured David Ellefson (MEGADETH); Marcos Curiel and Wuv Bernardo (P.O.D.); John Tempesta (THE CULT, MOTOR SISTER); Ron "Bumblefoot" Thal (GUNS N' ROSES) and more. Special guests including HALESTORM's Lzzy Hale and Arejay Hale, Chad Gray from HELLYEAH, Tim "Ripper" Owens, and NONPOINT's Robb Rivera joined THE STOWAWAYS for unforgettable performances of MOTÖRHEAD's "Ace Of Spades", TEMPLE OF THE DOG's "Hunger Strike" and much more.

Produced by ASK4 Entertainment, ShipRocked is a once-in-a-lifetime experience with unique performances and musical collaborations that provides guests with the opportunity to vacation with their favorite bands, meet new friends, and reunite with old ones year after year. ShipRocked onboard and beach activities include photo meet-and-greets with band members, poolside games, artist Q&A sessions, trivia challenges, game shows, parties, contests and more. The ShipRocked Cancer Sucks! onboard charity auction has raised nearly $500,000 to date for innovative medical research and finding a cure for cancer. 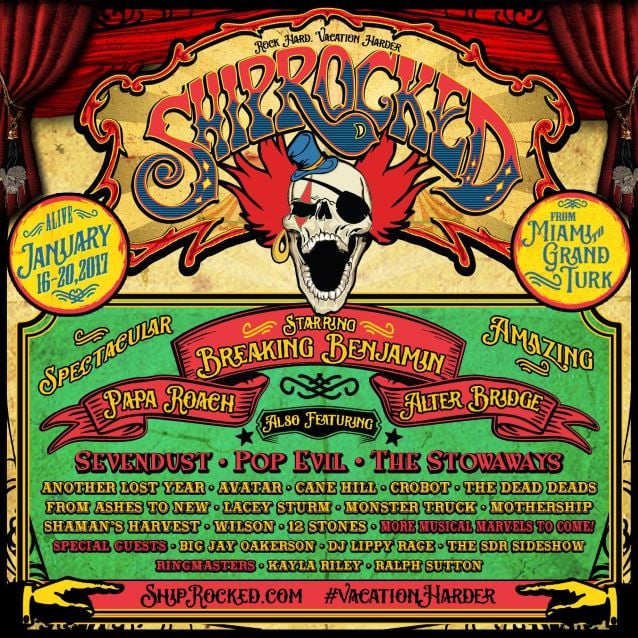