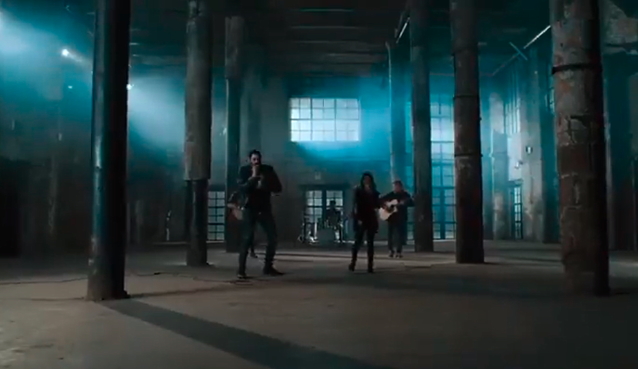 BREAKING BENJAMIN has released a teaser for its music video for "Dear Agony". The full clip, which features a guest appearance by Lacey Sturm (ex-FLYLEAF),will make its online debut tomorrow (Wednesday, April 15).

Last summer, BREAKING BENJAMIN's founder/frontman Ben Burnley told "Cutter's RockCast" that he had been friends with Sturm for more than 10 years. "And one of the first tours, I think, they [FLYLEAF] ever did — not the first, but one of the first tours they did ever — was with us," he said. "And it was a lot of fun. It was a lot different back in those days. Enough success to have fun, but not overboard, and it was all new and everything. And she was always really cool; the whole band was always really, really cool.

As a thank you for all of your support on Far Away, @breakingbenj will be dropping the official music video for our collaboration of Dear Agony off of their latest album, Aurora, tomorrow! Hope you all enjoy it!💜🤟🏼#dearagony#aurora#breakingbenjaminpic.twitter.com/rVTUquaavo