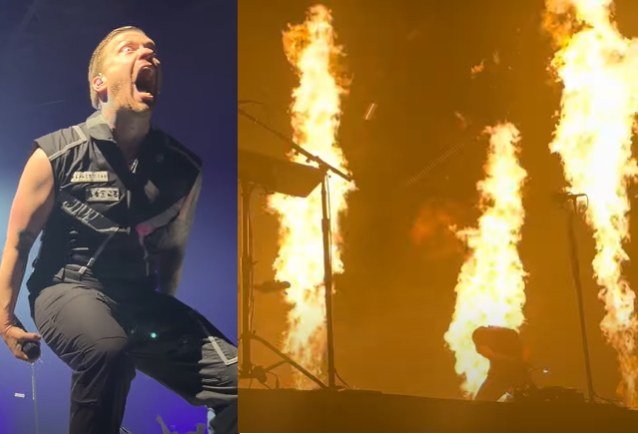 In a new interview with the 105.7 The Point radio station, SHINEDOWN frontman Brent Smith spoke about the band's current live show, which includes a massive stage complete with moving lights, pyrotechnics and a piano riser that appears and disappears onstage throughout the night. He said (as transcribed by BLABBERMOUTH.NET): "The goal is to take you on a ride. The goal is to, sonically and visually, give you an experience — everything that you want a show to be, not just even in the rock and roll mindset of that.

"We've always been a band… we've put it back into the show over the years," he explained. "I do remember the very first time, going back 10 years ago, that we told our management that we were gonna bring in pyro, and they were, like, 'You're gonna do what?' Because sometimes people look at pyro and they're, like, 'Money is just going up in flames.' But I'm, like, 'No, it's not.'

SHINEDOWN's new album, "Planet Zero", produced by bassist Eric Bass, is out now via Atlantic Records. The album debuted in the Top 5 on the Billboard 200 chart and the official U.K. albums chart, and at No. 1 on six other Billboard charts, including Top Album Sales, Rock, Hard Rock and Alternative Albums.

Three weeks ago, SHINEDOWN released a brand-new Amazon Original of the band's current hit single "Daylight", available now only on Amazon Music. The track is a complete re-imagining of the song that changes up the chord progression and tempo and injects big drums and an aggressive distorted synth guitar tone that balance against the beauty and softness of the verses and chorus.