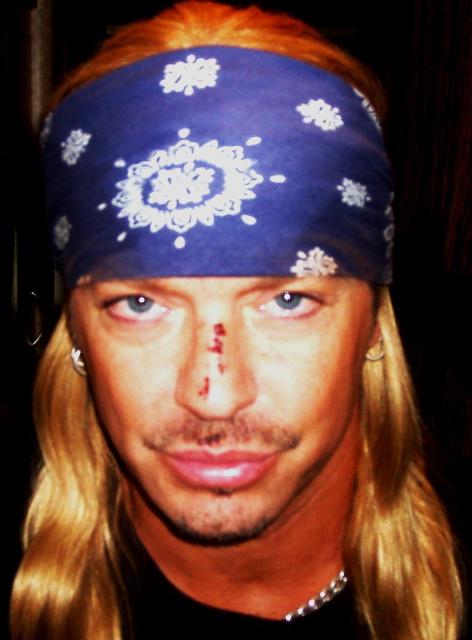 According to TMZ.com, POISON singer Bret Michaels has filed a lawsuit over the incident at the June 2009 Tony Awards when he got clocked in the head by a descending set piece during his band's performance. Michaels' suit against Tony Award Productions, CBS and others blames producers for not instructing him on how to safely exit the stage after his performance was over, because while he tried to exit, he was "smacked" in the face by a piece of the set. Bret also says that he nearly died in April 2010 from a subarachnoid brain hemorrhage, which he believes was caused by the injuries he suffered at the Tony Awards. In his suit, Michaels claims, "One of the most common causes of this type of hemorrhage is head trauma — exactly like the one Michaels suffered at the hands of the Tony Awards." Michaels notes, "Through his sheer will to live, to see his children grow up, [he] was able to survive this trauma."

Shortly after the Tony Awards incident, Tonys spokeswoman Christina Stejskal said the rocker "missed his mark," which resulted in him failing to get back to the stage in time (as did the rest of POISON) and trying to jump up, only to have a descending set piece smack him on the head and knock him to the ground.

Back in June 2009, Michaels told People.com that he had no plans to file a lawsuit over the Tony Awards incident, insisting, "I want to make very clear to everybody that — first and foremost — I was honored to be asked to be at the Tonys. I'd never done it before and in all my life it's not something I thought I'd be on. I was really excited. There's no lawsuit. I'm not doing any of that. I'm taking the high road."

Michaels' neurologist Dr. Joseph Zabramski held a press conference for reporters in May 2010 and responded to speculation that the POISON frontman's brain hemorrhage could be related to his onstage injury at the Tony Awards. "I do not believe that that [a connection between the brain hemorrhage and the Tony Awards injury] is a possibility at all," said Zabramski. The doctor added that far too much time had passed for the incidents to be related. "A hit in the head can cause a subacute hemorrhage, but it causes it immediately," Zabramski explained. "If that had caused a problem that led to this hemorrhage, we would have seen a problem with his blood vessels."