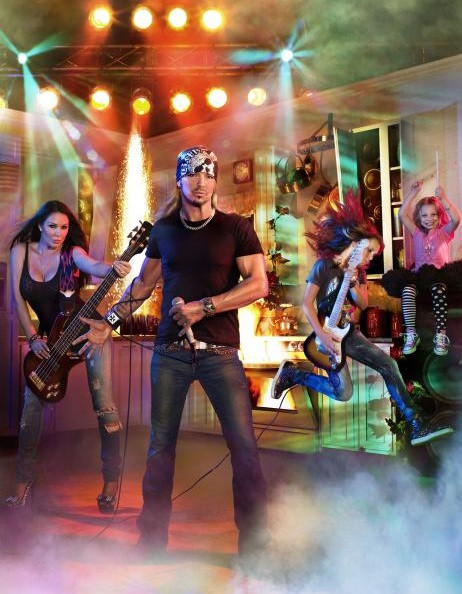 BRET MICHAELS: 'Life As I Know It' Sneak-Peek Clips Available

POISON singer Bret Michaels' new VH1 reality series, "Bret Michaels: Life As I Know It", will premiere on October 18 at 10/9c. The series showcases the 47-year-old rocker's life with his two daughters — Jorja, 5, and Raine, 10 — and Kristi Gibson, the mother of Michaels' kids, with whom he has been together on and off since 1993.

Two sneak-peek clips can be viewed by following the links below.

After the lights have dimmed on stage and the music stops for the night, Bret rolls off the tour bus right into the loving arms of his daughters Raine and Jorja, who affectionately refer to him as Poppa Rocka. But raising two little girls and being a rock god doesn't always go hand-in-hand, and now fans can get a peek at what keeps Bret going. Is it the hoards of wild fans, the glory of super stardom, or is it the unconditional love from his family? Watch as Bret juggles life on the road, his career, raising two kids and managing his on-again-off-again relationship with their beautiful mom, Kristi.

"Bret is like family to us and has always been a huge hit on the network, headlining several series that have garnered record breaking ratings so we are tremendously pleased to be giving viewers a look into his life in his new series, 'Bret Michaels: Life As I Know It'," said Jeff Olde, Executive Vice President of Original Programming and Production of VH1.com. "Seeing Bret not only as a rock star, but also in his real life with his kids and their mother gives real access to the life of a celeb who puts his family above all else."

Full episodes and extra scenes from "Bret Michaels: Life As I Know It" will be available on VH1.com and through VH1 Mobile each week following the show's on-air premiere.