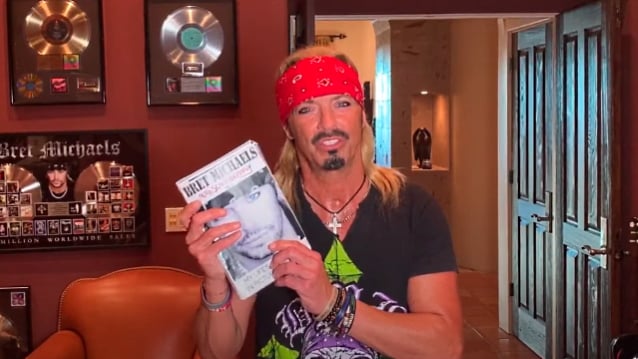 POISON singer Bret Michaels spoke to "Ira On Sports" about his recently released his first book, titled "Bret Michaels: Auto-Scrap-Ography". The book, which is available in both e-book and hardcover formats, is handwritten by the artist, detailing his journey even up to and including his battle with diabetes and the coronavirus pandemic.

Bret said: "The e-book is the same — except for a couple of things — it's the same as the hard copy, as the print. In June comes the audiovisual big read. So it's one of the first books where I've read the entire thing like Audible [Amazon's audiobook service]. You see me reading it — I'm in my living room, I'm reading it; I'm in the studio reading it — I'm reading you the book just like it is, and the next thing you know, you're seeing the images come to life. So all of a sudden, an image comes up, then an image starts moving. You're seeing all these moving images, and that will come later in June. But right now, the e-book is instant, and the print. And the first two prints have sold out, which is — I'm knocking on my wood on my head — great considering the times we're in. So I think people are gonna be blown away by the new format."

Earlier in the month, POISON, MÖTLEY CRÜE, DEF LEPPARD and JOAN JETT & THE BLACKHEARTS announced that "The Stadium Tour" has been postponed until the summer 2021 due to the coronavirus pandemic.

"The Stadium Tour" was scheduled to kick off on June 18 at TIAA Bank Field in Jacksonville, Florida and run through September 5 in Los Angeles. The bands reportedly also booked time at VyStar Veterans Memorial Arena in Jacksonville to rehearse for the tour.