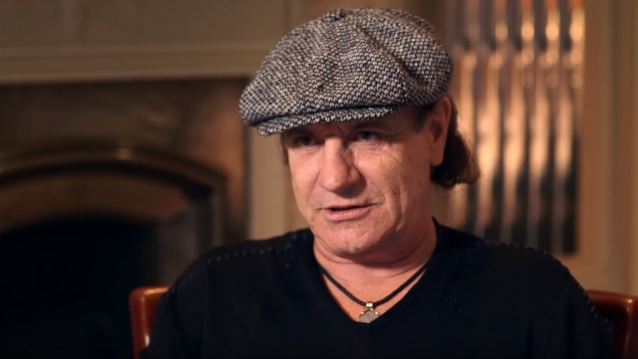 Brian Johnson has reportedly confirmed that he will appear on AC/DC's upcoming studio album.

Rumors of the singer's involvement with a new AC/DC record have been circulating for several months, ever since he and drummer Phil Rudd, along with guitarists Angus Young and Stevie Young, were photographed outside Vancouver's Warehouse Studios. Based on the pictures, the assumption at the time was that AC/DC was in the midst of making — or at least planning — another album, with Rudd and Johnson both back in the lineup. Online reports have also indicated Angus Young will dedicate the new AC/DC album to his late brother.

While AC/DC has yet to reveal any details of a new studio recording, Brian apparently let the cat out of the bag earlier this this week when he bumped into the American band TERRORIZER at an airport near his home in Sarasota, Florida.

On Monday (January 28),the grindcore trio — which features in its ranks former MORBID ANGEL drummer Pete Sandoval — took to its Facebook page to recap the group's just-completed European tour. After praising the other bands on the trek and thanking its road crew, TERRORIZER wrote: "We ran into Brian Johnson from AC/DC at the airport today after the flight home and we asked him about the rumors of him being on the new AC/DC album and he said 'yes' and that he is 'sick of denying it.' So that was a cool surprise ending to the tour."

Ever since AC/DC completed the tour cycle for its 2014 album "Rock Or Bust" more than two years ago — a turbulent trek that weathered the forced retirement and eventual death of co-founder Malcolm Young, plus the departures of Johnson, Rudd and bassist Cliff Williams — fans have wondered whether sole remaining founding member Angus Young would keep the band going or decide it was time for AC/DC to pack it in.

Last night we played the final show of the TERRORIZER - "Caustic Attack Over Europe" Tour 2019. The last week we have...