BRING ME THE HORIZON Announces 'The American Nightmare Tour' With UNDEROATH, BEARTOOTH

British rock band BRING ME THE HORIZON has announced "The American Nightmare Tour", hitting North America this spring with very special guests UNDEROATH and BEARTOOTH. See below for dates.

Last week, BRING ME THE HORIZON released the music video for "Oh No", the newest single taken from their fifth studio album, "That's The Spirit". Rolling Stone raved the band "embraces their arena-level status with the outlandish, cinematic new clip," while Billboard simply described it as "spellbinding."

On December 2, BRING ME THE HORIZON will release "Live At The Royal Albert Hall", a special DVD/CD package from the band's sold-out concert this past April at the famed venue in London. Proceeds will benefit Teenage Cancer Trust.

The Sheffield, England-based band released "That's The Spirit" in September of 2015 via Columbia Records; the album marked a career high for the band, becoming the #1 selling album in the U.S. in its first week. "Throne", the lead single from the album, held the No. 1 spot at Active Rock radio for two straight weeks. 2016 has already seen the band tour heavily in support of "That's The Spirit", completely selling out their 2016 U.S. headline tour this past spring, as well as taking the European festival circuit by storm with appearances at Glastonbury, Radio 1's Big Weekend, Roskilde and Pinkpop. Bringing their massive 2016 to a close, BRING ME THE HORIZON will see the year out in style with a string of huge arena dates in Europe, which has included two nights at London's O2 Arena. "The American Nightmare Tour" is the band's third and final North American tour in support of "That's The Spirit". 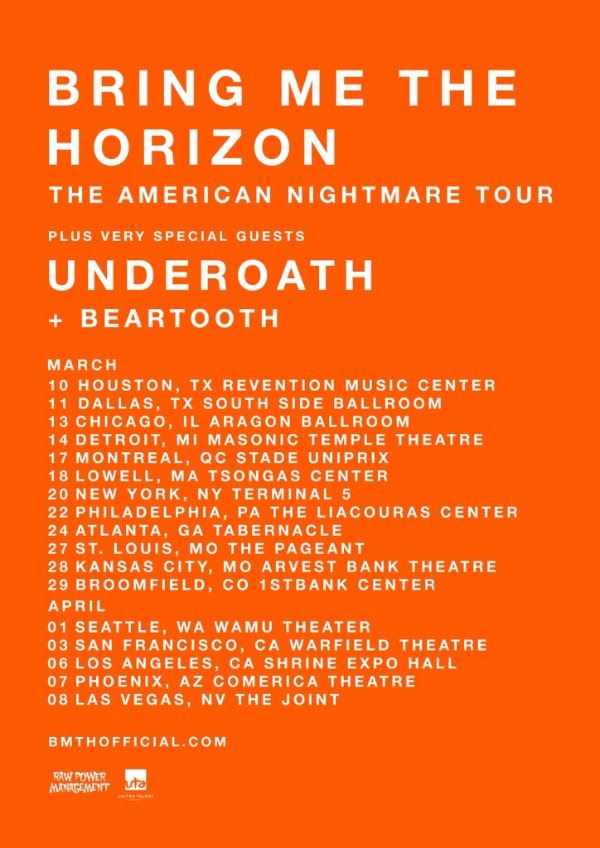