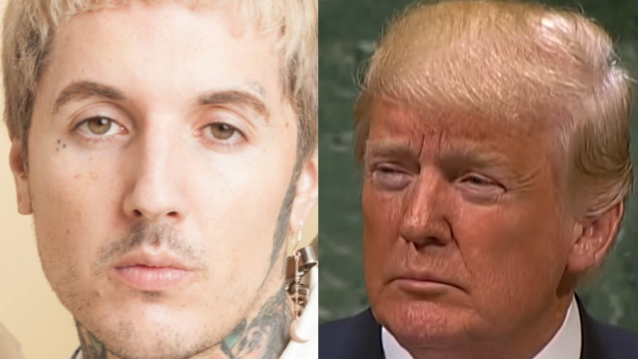 BRING ME THE HORIZON singer Oli Sykes has slammed Donald Trump as "the ugliest human this world has ever seen" after the U.S. president again publicly mocked teen climate crisis activist Greta Thunberg.

Trump tweeted Thursday it was "ridiculous" Time magazine named Thunberg its "Person Of The Year," saying that the 16-year-old Swede who has been diagnosed with Asperger's syndrome has "anger management" issues.

"So ridiculous. Greta must work on her Anger Management problem, then go to a good old fashioned movie with a friend! Chill Greta, Chill!" Trump wrote, responding to a tweet congratulating Thunberg on being named "Person Of The Year."

In response to Trump's words, Oli tweeted simply: "U r the ugliest human this world has eva seen."

Thunberg, who delivered an address at the U.N. climate conference on Wednesday in Madrid, appeared to brush off Trump's attack, changing her Twitter profile to read: "A teenager working on her anger management problem. Currently chilling and watching a good old fashioned movie with a friend."

Thunberg has gained international media attention in recent months for her outspoken activism on climate change, including delivering an impassioned speech to the United Nations Climate Action Summit calling out world leaders for not responding to the climate crisis with more urgency.

President Trump, who has repeatedly voiced skepticism about climate change, shared video of Thunberg's speech on Twitter, and above it wrote, sarcastically, that "she seems like a very happy young girl looking forward to a bright and wonderful future. So nice to see!"

In her speech to the U.N., Thunberg said: "This is all wrong. I shouldn't be up here. I should be back in school on the other side of the ocean.

"Yet you all come to us young people for hope. How dare you? You have stolen my dreams and my childhood with your empty words. And yet, I'm one of the lucky ones.

"People are suffering. People are dying and dying ecosystems are collapsing.

"We are in the beginning of a mass extinction and all you can talk about is money and fairytales of eternal economic growth.

"How dare you continue to look away and come here saying that you're doing enough when the politics and solutions needed are still nowhere in sight," she said. "You say you hear us and that you understand the urgency, but no matter how sad and angry I am, I do not want to believe that. Because if you really understood the situation and still kept on failing to act then you would be evil, and that I refuse to believe."

U r the ugliest human this world has eva seen