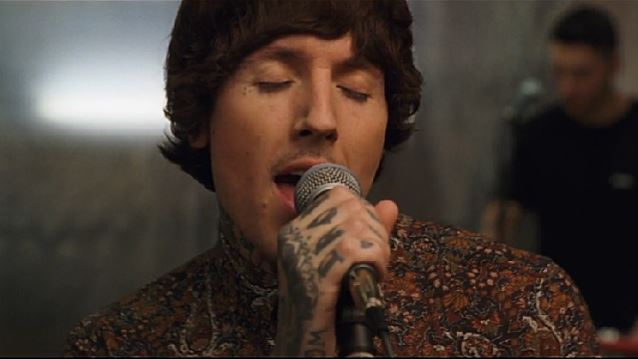 BRING ME THE HORIZON Releases Cinematic 'Oh No' Video

"Oh No", the new video from the British metalcore group BRING ME THE HORIZON, can be seen below. The clip was directed by Isaac Eastgate, who has previously worked with SPRING KING and LA PRIEST, among others.

"This is the first video I've took a step back from creatively and let the director take full control," BRING ME THE HORIZON singer Oli Sykes tells Rolling Stone. "At first, I was apprehensive but when it all came together I was psyched on it. It's got a good balance of humor and meaning, and it's a video that leaves you with a lot of questions."

Sykes said in a recent interview that he hopes to "push it a bit weirder" on BRING ME THE HORIZON's next album.

Even though he believes BRING ME THE HORIZON took a different direction on its latest release, "That's The Spirit", the frontman admits the group didn't venture too far outside its comfort zone while making the record. He told NME: "People thought 'That's The Spirit' was a very polished pop rock album. It's not. I think it’s inventive and unique, but it's still safe in a way. We knew the songs were going to connect well with people. Next time I think we want to push it a bit weirder. Who knows?"

Sykes said BRING ME THE HORIZON might experiment with "a darker, dance-y kind of sound" on its next album, namechecking LINKIN PARK and MASSIVE ATTACK as influences. He added: "That's my favorite part — it's something we do that comes across really well live you know when the song to us has a breakdown or like a heavy dance kind of vibe to it. You know, there's not many acts like that. If there was some bridge between what we're doing, somewhere between artists like PRODIGY or MASSIVE ATTACK and stuff like that."

He continued: "I don't know especially if we're thinking like festivals and stuff, then I like that idea like a darker dance-y kind of sound, but I'm literally just… I'm thinking out loud here, 'cause we could go completely opposite to that, you know."

Oli said that BRING ME THE HORIZON will probably take "at least a good month" off before they begin writing again. He explained: "It's been an intense year for us, and not just in professional terms but, like, personal too. Some of the band have had a lot on their plates and stuff. We do enjoy writing organically and letting something happen, but we've been working pretty relentlessly for the last album.

"We need to maybe take a break. [Keyboardist] Jordan's [Fish] got a kid now, people have got families and stuff. We need to take a bit of time to chill out and then really get hungry to write again.