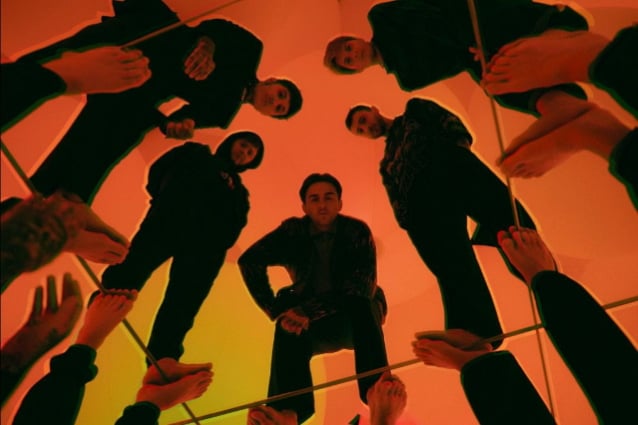 British rockers BRING ME THE HORIZON have released the official music video for their new single, "Teardrops". The track is taken from the band's upcoming album, "Post Human: Survival Horror", which is due on October 30. The nine-song effort will include the previously released singles "Obey", "Ludens" and "Parasite Eve", as well as new collaborations with NOVA TWINS, BABYMETAL and EVANESCENCE's Amy Lee.

The "Teardrops" clip was directed by frontman Oliver Sykes, who says about the track: "It is my favorite song off the record. I'm so excited to get this single out. It feels like a classic BRING ME THE HORIZON tune but without it feeling like anything we've done before. I feel like 'Teardrops' is some of the best work we've ever done, musically and lyrically as whole."

This past June, Sykes told Kerrang! magazine about the band's new music: "Like [2019's] 'Amo' [album] was very collage-y in terms of it spanning from ballads to poppy songs to heavier songs to electro, we wanted this next record to be a mood. As the pandemic unfolded and everything changed, the mood I had in mind started to not feel right. Basically, I had this idea to make some records — I didn't know how many, but more than one — that all fell under a blanket name of 'Post Human'. Each record would have its own theme and its own message. The first was going to be about compassion and self-love because I wanted to build up to a record about changing ourselves and changing our future because we need to self-evolve. We can't just say, 'We are humans. This is how it is,' because as humans, we've already stepped outside of the food chain by bringing technology into our lives. We need to continue to modify ourselves until we can be proud of what we do on this planet and live harmoniously, not just with ourselves but other creatures. That's the message I wanted to put out there, but I know the world's not ready for that on the grand scale. First, we need people to love themselves. There's too many people out there that hate themselves, and I always think, 'If you don't have compassion for yourselves, how're you going to have compassion for other people?'

"But as the pandemic unfolded, I didn't think the world was ready for that record. Just like everyone else, I'm pissed off, I'm scared, I'm angry… we need to write a record that embodies that. Before we get to compassion, we need to get out the frustration and anger. This first record's going to be battle songs, like a recruitment record — songs of anger and hope. It's not going to offer a solution, it's going to be more about asking people to come and find a solution with us. This first music is to get you back up, get your blood pumping, get you pissed off and thinking about what's going on. The record will follow a similar tone of 'Ludens' and 'Parasite Eve' and that's going to be the first record of four. We're going to release four different records over the next year, all under this name 'Post Human', and they'll all be very different. There'll be a thread, and the lyrical themes will progress as a story, but in terms of the tone, it'll be quite different."

BRING ME THE HORIZON spent the last few months writing and recording new music remotely, releasing a series of videos that show how the band has managed to work on the songs during the coronavirus pandemic.