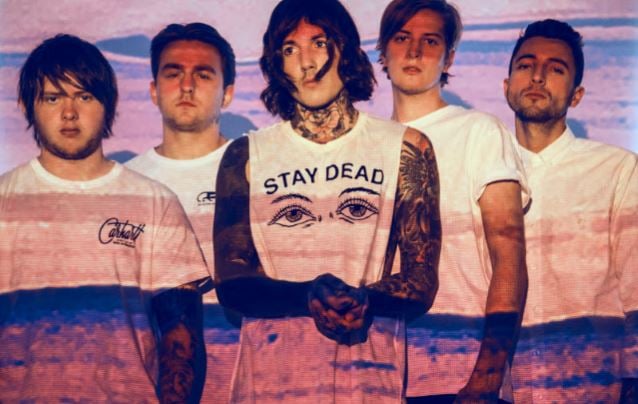 British metalcore act BRING ME THE HORIZON has set "That's The Spirit" as the title for its fifth album, due on September 11 via Columbia Records. Around twelve tracks were laid down for the CD, which was produced by BRING ME THE HORIZON keyboardist/vocalist Jordan Fish.

BRING ME THE HORIZON frontman Oli Sykes told NME.com about the new album title: "It's a celebration of depression, a way of making light of it. 'That's The Spirit' — it's quite a depressing phrase when you think about it — the sort of thing you only ever use when you know there's no positive answer to the situation."

Recording sessions for "That's The Spirit" took place at Black Rock Studios on the Greek island of Santorini. The CD will include the track"Drown", which was released as a "tester" single, plus "Happy Song", described by Sykes as an "unofficial title track."

Speaking about the much wider palette of influences which have gone into the making of BRING ME THE HORIZON's new CD, Sykes said: "This time round, the challenge wasn't just for people to be impressed that a screamer's learned to sing. We had to come back with something that would be impressive for people who had no idea of the history of the band."

Regarding the fact that BRING ME THE HORIZON chose to have Fish helm the new effort, Sykes said: "Producers are fine. But they want to justify the importance of their jobs sometimes, so they say things to you like: 'Oh, I know — why can't you do it in the swimming pool?' We know enough now that we were, like, 'It's not that hard. Let's just lay everything down the best way we can, and get on with it.'" "Plus," added Fish, "they cost a lot of money."

BRING ME THE HORIZON's "Live At Wembley" concert DVD was released in June. The set was filmed last December in London when the Yorkshire-based band headlined that city's most prestigious venue, Wembley Arena.