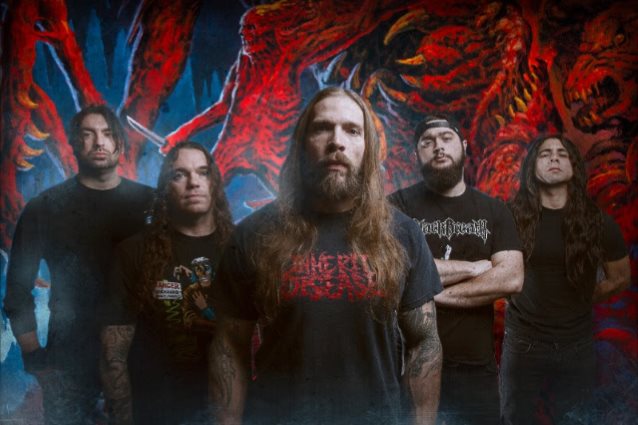 Horror aficionados BROKEN HOPE pay tribute John Carpenter's 1982 classic "The Thing" with the worldwide premiere of the title track of their new album, "Mutilated And Assimilated".

Directed by Tommy Jones, and featuring illustrated storyboards by Mark Rudolph, the infectious essence of brutal death metal details the decimation of the living in this gripping audio-visual recount. You can almost feel your bones start to crumble as lacerating guitar riffs rip through terrified flesh, serenaded by the vocal infliction of delicious sonic wounds.

Says BROKEN HOPE guitarist Jeremy Wagner: "As you watch and hear, the story of a monstrous alien thawed out of Antarctic ice unfolds in pure horror with a death metal soundtrack.

"The video was directed by Tommy Jones, who uniquely wove in BROKEN HOPE concert footage from Berlin with incredible storyboards by the great Mark Rudolph.

"Mark Rudolph worked hard to create these amazing storyboards — much like legendary artist Mike Ploog did for the original movie."

The "Mutilated and Assimilated" artwork was created by Wes Benscoter and can be seen below.

Regarding the follow-up to 2013's "Omen Of Disease", Wagner said: "BROKEN HOPE studio album number seven?! Un-fucking-believable! I'm floored at how amazing our new album turned out. The songs are relentless and violent and dark and heavy — and all from a fresh and ferocious place we haven't shared before. Moreover, thanks to my new studio and the stellar work of engineering/producing Jedi — Scott Creekmore — the production is on a sonic level like we've never had in our career.