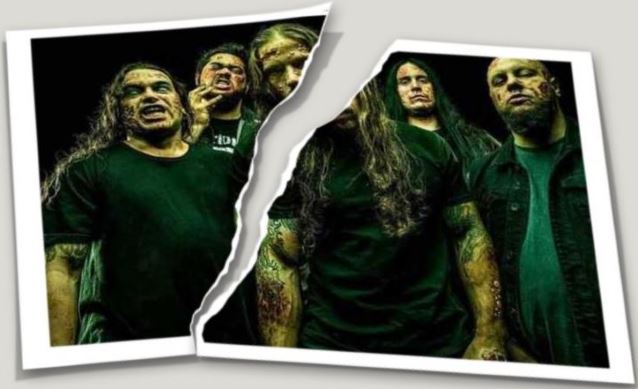 Bassist Shaun Glass and guitarist Chuck Wepfer have left Illinois death metallers BROKEN HOPE to concentrate on their new band, THE BLOODLINE. Glass tells BLABBERMOUTH.NET in a statement: "We have been very focused and busy with our main band THE BLOODLINE so much that we haven't had any time to be part of BROKEN HOPE for the last 4-5 months as we can't commit to two bands 100 percent. That said, we aren't a part of BROKEN HOPE anymore, but we wish them and their new members, Matt Szlachta (DIRGE WITHIN, CHIMAIRA) and Diego Soria (DISGORGE),the best with what they do. And to all the amazing BROKEN HOPE fans, we will see you on the road."

BROKEN HOPE was formed in 1988 by guitarist Jeremy Wagner, while he was in high school. Shortly after formation, they recorded two demo tapes and signed with indie label Grind-Core Records. Then, in 1991, they released their debut album, "Swamped In Gore", launching the band out of the underground and into the mainstream. From there, the group signed to Metal Blade Records and released three more albums, all stellar examples of BROKEN HOPE's fury, which etched their place in death metal history.

After BROKEN HOPE's 1999 album "Grotesque Blessings" and world tours, Wagner cleaned house and put BROKEN HOPE into "metal hibernation" in 2000. On January 20, 2010, original BROKEN HOPE vocalist Joe Ptacek tragically committed suicide. He was only 37 years old. Before his death, Ptacek met with Wagner and Glass and discussed the resurrection of BROKEN HOPE. With Ptacek's death, Wagner and Glass took time off to reconsider their next moves.

In 2012, BROKEN HOPE signed with Hard Impact Management and vowed to make BROKEN HOPE a full-time monster. Wagner and Glass recruited longtime friend and GORGASM vocalist Damian Leski as their new frontman and shortly after marked their return on the highly successful Carnival Of Death tour.