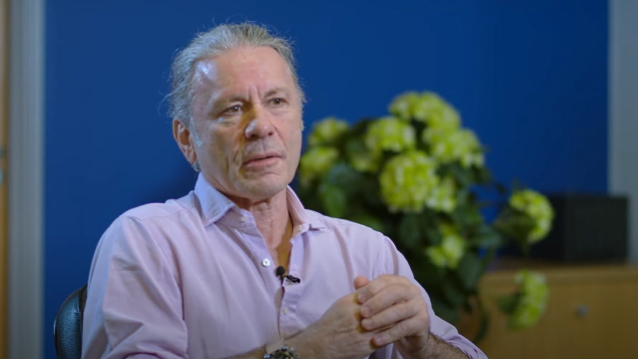 BRUCE DICKINSON: 'Half Of Us Are Gonna Get Cancer, And It's Not A Death Sentence Anymore'

IRON MAIDEN singer Bruce Dickinson, who was diagnosed with throat cancer back in late 2014, was asked during the question-and-answer portion of his January 18 spoken-word show in Orlando, Florida what advice he would give to anyone getting ready to start their own battle against cancer. He responded (as transcribed by BLABBERMOUTH.NET): "Here's the way I dealt with it… And people will deal with it in different ways. I embraced the treatment. So I went along to see the big radiation machine and I said, 'Okay, how does this work then? What does it do? And how much are you giving me and where? And how are you making a difference between this one and this one and this one? And you can do what with it? Wow, that's really cool. That's amazing. It's insane, the technology.'"

He continued: "I would say embrace the treatment and always remember the [likelihood]… I don't know what your cancer is. I don't know the individual circumstances. I'm not a doctor, so I'm not gonna make any predictions. I can't do anything like that, nor would I, 'cause it's very private. But I have to say that the therapies that people are coming up with now are so on the edge and successful that you really do stand a very good chance. 'Cause half of us are gonna get cancer, and it's not a death sentence anymore, and you can deal with it. And the things they have to do to your body to get rid of it are getting better and better and better as we go down the line. They did some nasty things to my body. I'm lucky I'm completely clear of it and everything.

"I only really talk about it when I come to do these shows 'cause people want to know," Bruce added. "I quite enjoy talking about it because you kind of demystify it a little bit for people. It's a scary thing."

Approximately 39.2 percent of men and women will be diagnosed with cancer of any site at some point during their lifetime, based on 2016–2018 data.

According to Healthline, the cancer death rate in the United States dropped by about a third (32 percent) from its peak in 1991 to 2019 — from about 215 deaths for every 100,000 people to about 146. Much of the reduction is due to the progress made against lung cancer, which remains the leading cause of cancer death in the country.

Bruce previously told iNews that he wanted to cover his cancer battle in his 2017 autobiography, "What Does This Button Do?", to raise awareness of the condition, which affects people who often have no or minimal history of tobacco or alcohol abuse. The individuals with HPV-related oropharyngeal cancer who undergo treatment have a disease-free survival rate of 85 to 90 percent over five years.

During an appearance on the Swedish TV show "Malou Efter Tio", Dickinson spoke about how his singing voice has changed following his cancer diagnosis seven years ago.

Dickinson said that he was given "the all-clear" by his specialists following an MRI scan after a course of chemotherapy and radiology.

"I was amazed," he said. "My cancer was a 3.5-centimeter tumor in my throat and a 2.5-centimeter one in my lymph node, and that was the one that I could feel — that was the secondary one. But I did 33 sessions of radiation and nine weeks of chemo at the same time, which is fairly standard therapy for it. And it was gone. And I said to my oncologist: 'What do you mean it's gone? Where has it gone?' And he said, 'Well, your body just gets rid of it.' A body is an amazing thing."