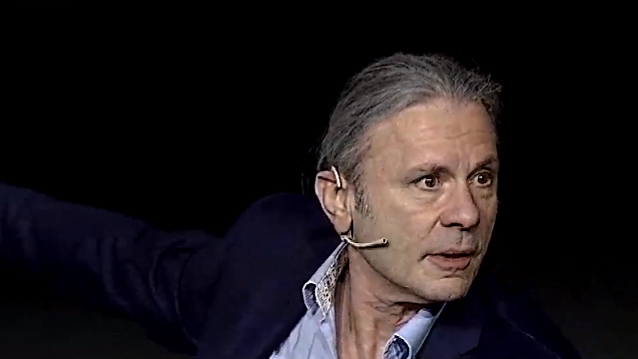 Bruce Dickinson was one of the speakers at this year's MABS (Management & Business Summit),which was held June 5-6 in Madrid, Spain. The IRON MAIDEN singer user his appearance at the event to discuss his various ventures as a pilot, entrepreneur, author, broadcaster and bona fide rock legend.

Speaking about how businesses can go about turning customers into brand advocates, Bruce said: "What's the definition of a customer? A customer is a person who can walk away. We don't want customers. We want fans.

"There are some brands that maybe you wouldn't wanna be associated with," he added. "But, nevertheless, don't be afraid of the word. It's not a dirty word. It depends who you are and what you do with it.

"I would urge you to think about turning all of your customers into fans."

In a 2018 interview with Brazil's GloboNews, Bruce admitted that it was a careful balancing act when using the IRON MAIDEN brand. "You can have fun with being a brand," he explained. "Nothing bad about being a brand... The only bad thing about being a brand is when people try and exploit it in a way that is not with any integrity.

"You can do great things with a brand. For example, because we're IRON MAIDEN, we can do a pinball table. I've wanted for years, I've been trying to get an IRON MAIDEN pirate Playmobil ship, like Lego-type stuff.

He added: "It's not like we're short of money or anything else like that. We don't need to do terrible things with our brand. We want to do nice things that have integrity and are fun.

"It doesn't matter if you don't want to buy the IRON MAIDEN t-shirt. The music is the most important thing. Everything else comes around that."

MAIDEN's "Legacy Of The Beast" tour will hit 33 cities across the U.S. and Canada beginning on July 18 in Sunrise, Florida. Support on the trek comes from THE RAVEN AGE. Additionally, FOZZY will be guests for the Banc Of California Stadium show in Los Angeles.