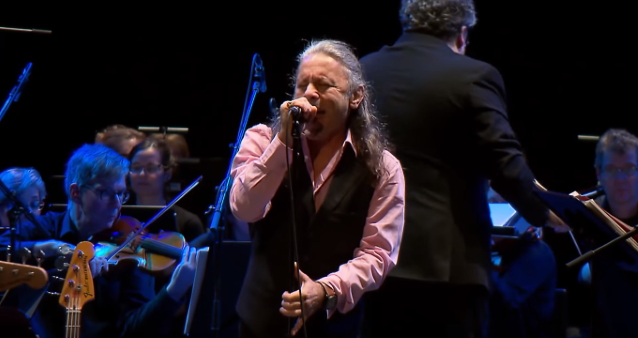 According to Eonmusic, Bruce Dickinson has revealed that he has been in discussions about bringing IRON MAIDEN's epic "Empire Of The Clouds" to the live stage along with other MAIDEN classics, in an orchestral setting. Dickinson, a huge fan of DEEP PURPLE, whose Jon Lord recorded the "Concerto For Group And Orchestra" in 1969, made the revelation during the question-and-answer portion of his spoken-word event in Dublin, Ireland on Friday night (December 13).

The idea, Bruce revealed, sprang from a conversation he had had while taking part in the 50th-anniversary concert celebration of "Concerto For Group And Orchestra" in late November at the Palais Montcalm in Quebec City, Quebec, Canada.

Said Bruce: "I did talk to the conductor Paul Mann, and we just very tentatively said, 'Wouldn't it be great if we could do something that might involve some MAIDEN songs, but only MAIDEN songs that are really appropriate for doing [with] an orchestra?' 'Empire Of The Clouds' is one of them. So yeah, you never know.”

When asked whether MAIDEN would ever perform "Empire Of The Clouds" at one of the band's concerts, the singer answered emphatically, "No."

Dickinson previously shot down the idea of MAIDEN including "Empire Of The Clouds" in its setlist during a 2015 interview with Noisey. He said at the time: "I don't think we'll play 'Empire'. You need strings, you need cellos, you need horns, you need all this stuff to play it properly, and it's such a dominating song. In the format of a regular IRON MAIDEN thunderous stage show, it would be altogether too dominant, I think, so we're definitely not going to be playing it."

Dickinson is not the only member of IRON MAIDEN to have expressed an interest in performing the band's songs with an orchestra. Back in 2015, drummer Nicko McBrain told the 98.7 The Gater radio station that he would love to see MAIDEN's music reinterpreted in an orchestral setting.

"I'd like to see us do like what Jon Lord did years and years back with the London [Symphony Orchestra], when he played the [Royal] Albert Hall, is do IRON MAIDEN songs with an orchestra," Nicko said. "I'd love [to do it], because there's a lot of stuff there. 'Alexander The Great' is a track that everybody's been moaning [that] it's been never played live. I'd like to do things like that. Everything that we haven't covered I'd like to see us do an orchestral version of. Perhaps that will happen one day. I think ['Empire Of The Clouds'] will probably be performed somewhere along the line, whether it's in an IRON MAIDEN formula, or whether it'll be Bruce doing something with that song with someone else, perhaps. But I don't think we can really see play that one live, 'cause there's so much going on. Michael Kenney [who has been playing keyboards on MAIDEN's records and world tours] does a lot of the fill-ins on songs where we've had… There's something probably on 'The Red And The Black', if we do that live, Michael would do that, or if we did something which has got some orchestration on it, which you can do with a keyboard, Michael Kenney would do it. But this you can't do; you can't do that. Plus there's a lot of percussion instruments on there as well and whatnot, so it really wouldn't be something… And it's 18 minutes long. I mean, you could do two songs in there [instead of 'Empire Of The Clouds'], couldn't you?"