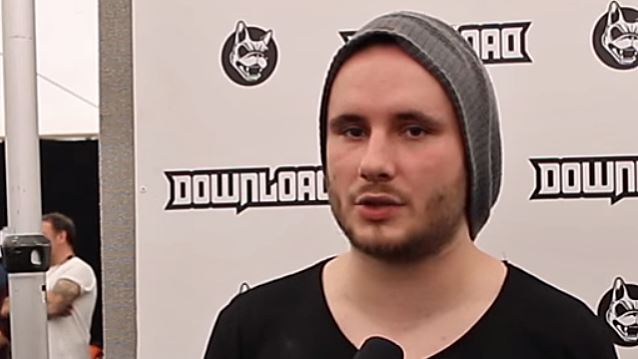 Austin Dickinson, vocalist of the London five-piece AS LIONS and son of IRON MAIDEN singer Bruce Dickinson, was interviewed by Ticketmaster UK at this year's edition of the Download festival, which is being held June 10-12 at Donington Park in Leicestershire, United Kingdom. You can now watch the chat below.

Speaking about Download's decision to pay tribute to late MOTÖRHEAD frontman Lemmy Kilmister with a stage named after the iconic rocker, along with an additional musical tribute, Austin said: "Obviously, music in general has taken a lot of casualties this year… I say 'casualties'… I think that a lot of them leave legacies that are just unwavering, untiring; they are forever. And that's fucking incredible. It's just unbelievable. So to see them pay tribute to an icon with Lemmy, like they did with [Ronnie James] Dio, it is incredible, and it does sort of matt the bonds and fibers of the community. I think that's really important.

"I'm really excited to see what they did for Lemmy today. I actually had the forture to meet him a bunch of times, and he was always really nice. [His] reputation preceded him very much. He was always just kind of another guy down at the pub when you actually started talking to him. But before that, you were kind of knocked knees, slightly sweaty palms. But he was one of a kind — a beautiful soul."

AS LIONS' debut EP is due later in the year via Better Noise Records, part of Eleven Seven Music Group. The CD was helmed by David Bendeth, the multi-platinum, award-winning producer who has previously worked with PARAMORE, PAPA ROACH, IN FLAMES, A DAY TO REMEMBER, BRING ME THE HORIZON, OF MICE & MEN and more, and was mixed by Josh Wilbur (MEGADETH, LAMB OF GOD).