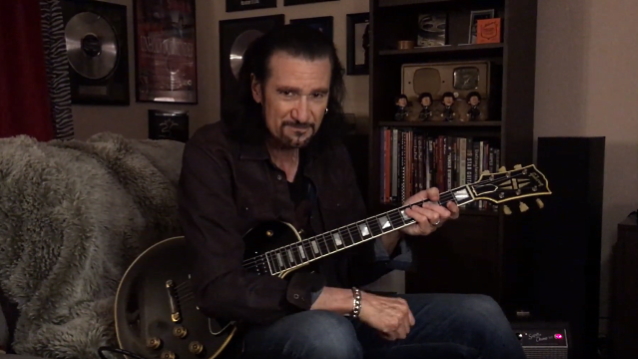 Former KISS and current GRAND FUNK RAILROAD guitarist Bruce Kulick was recently interviewed by the "Pod Of Thunder" podcast. You can listen to the entire chat below. A few excerpts follow (transcribed by BLABBERMOUTH.NET).

Bruce: "I have a great band. We worked really hard. They're fans. They're really big fans. Brent Fitz [drums], Zach Throne [bass/vocals] and Todd Kerns [guitar] are really huge KISS fans. It's so funny; thank god I have control over them because if it was up to them, it would get crazy with how many songs they would try to work out. Someone has to reel them in and make decisions. They challenged me quite a few times about things and I recognized the importance of hearing them and making it work. I didn't think I'd ever explore 'Animalize' the same way as I did this year, but, it made sense with the 35th anniversary. I'm not the guy who likes to celebrate 33s and 31s and 37s. [Laughs] I like the big numbers. The fact that it represented something really important in my life, which changed my life, changed my entire life, which was becoming a member of KISS, meant I really wanted to explore that. Even though some of those songs we played a little bit during my first tour, many of them were never played live, of course, and that's how you go deep with tracks that again, you're not taking it out on a big tour like KISS would have to do, then they'd have to present their whole career. When it comes to setlists for KISS, it's always a challenge, but I have a lot of songs to choose from."

On whether he would ever take his "Kiss Kruise" band on the road:

Bruce: "We have gotten a few offers and people asking about things. I am a full-time member of GRAND FUNK, even though that means not the same as some bands where you go off for two months at a time or almost a year like KISS just did in 2019. And then last year, for example, Todd and Brent played with Slash [FEATURING MYLES KENNEDY AND THE CONSPIRATORS] and they did so many gigs with Slash, it was ridiculous. Then, of course, Slash got busy again with GUNS 'N ROSES. We're going to look at the opportunities that come our way that could fit everyone's schedules. So I don't want to say we couldn't do something. I just don't know yet and I certainly want to make it work if it was going to be something. I don't necessarily want to take this band out and play clubs where I have a couple of hundred people. That's not going to be very exciting to me because even though I know they're hearts will be in the right place, the people in the club, but to have a pool deck full of a couple of thousand people on the cruise, you get used to that. I'm not sure, really, what really the response would be in the States. I think internationally, it would do even better and that makes it even more complicated because it's expensive to go to Europe or South America. I bet we could play some festivals and the only problem with that is that's kind of during my busy time with GRAND FUNK. I'm going to weigh all the options and see the best what I can do. My guys are really patient about it; they understand. But the big ask is whether we get asked to do 'Kiss Kruise 10', which I'll presume, I mean, I haven't officially been asked. We have such an exciting thing to look forward to with that. Who knows? Maybe there will be some other things. The other important thing I did want to mention is I do really plan to record with the guys. We all happen to live in Las Vegas. We almost thought about doing that when we were prepping for the cruise, but it took a lot of work to put together the set we did. I'd like to say we'd be able to put out two to four songs, maybe an EP of material, some original, some covers. These guys are the right to do it with because they're really talented and we all get along so well and play well together. We'll see how that pans out. That's a goal in 2020 that I really think, even before I could say, 'Yeah, catch us at these venues. We're gonna do this West Coast run or we're gonna do this Midwest run,' but, I'd like to say at some point I'd be able to do some things like that."