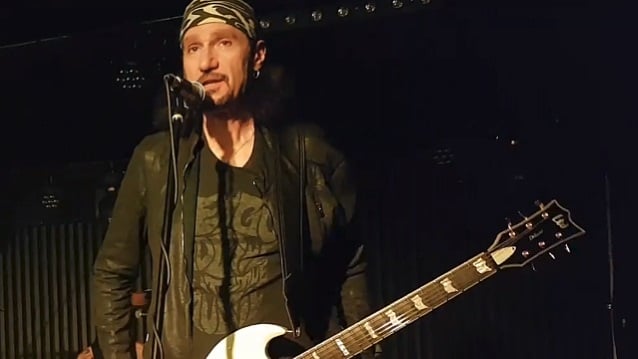 Former KISS guitarist Bruce Kulick was interviewed by Metalliluola's Ville Krannila during the Kiss Expo in Helsinki, Finland on November 25. The full conversation can be streamed below. A few excerpts follow (as transcribed by BLABBERMOUTH.NET):

On how his brother, Bob, helped him score a gig with Meat Loaf:

Bruce: "When they were looking for guitar players, they liked Bob right away. They weren't so sure about me, [but] Bob was very insistent on me as well, which they realized was the right decision because I could learn the Todd Rundgren stuff. I was a little more into studying the stuff, where Bob just did his style, and he did it great, but he didn't want to necessarily copy somebody. When I learned Todd Rundgren's guitar parts for 'Bat Out Of Hell', everybody in the Meat Loaf organization was pretty happy, so they got quite a powerful team of brothers to be the touring band."

On performing with Bob for the first time in years on Kiss Kruise VII:

Bruce: "Obviously, we did the very long 'Bat Out Of Hell' tour, but that was, you know, 40 years ago. Outside of one time playing a short set at a Kiss Expo, we never did that before, and to do it on the Kruise was really magical. It really worked; everybody's talking about it. I've been gigging for 17 years with GRAND FUNK [RAILROAD], so I'm out there a lot playing for various-sized crowds, from a casino showroom to a big city festival, and there could be 10,000 people there. But Bob was behind the scenes for many years doing studio stuff and producing and everything, so to him, it was real thrill to be on stage and performing those songs. He's real excited. We accomplished what we wanted to, which was to really put on an entertaining show."

Bruce: "I think one of the oddest things about 'Asylum' was more of the artwork and the clothing and the videos, [which] were very exciting, though. Paul [Stanley] actually helped design that, and I think he went for a very colorful, arty kind of thing, and maybe it didn't look the same as the makeup era or 'Creatures Of The Night' or even 'Lick It Up'. But I actually liked it — I didn't have a problem with it. I got a little color identification there, but there are some great songs on that record."

Bruce: "When I did a more in-depth rewind, it actually was better than I thought. We went back to not having a producer for 'Hot In The Shade'. I didn't have a choice in the decision, but I actually liked it when we worked with an outside producer, because I found then there was somebody that could be in the middle politically between Gene [Simmons] and Paul, as opposed to them trying to negotiate what to do, because they were both so dominant in the band."

Bruce: "'Revenge' is probably my favorite [KISS] CD. A lot of that was [producer Bob] Ezrin's direction and insistence on making the guitar really bring the song up to another level. He is very difficult. I'd say sometimes he's like a mad professor, but he knew what he wanted. He's just a very creative man, and I did enjoy working with him, and I was aware of why some record why 'The Wall' from PINK FLOYD and Peter Gabriel and Alice Cooper and the KISS stuff, especially 'Destroyer', those records were so important to fans, and myself. I really did see his talent, and I learned a lot. Ezrin pulled out some ideas that I would have never, never imagined, and they didn't all work, but the ones that did, they're like, 'Oh my God – now I know why he's been in the business so successful.' I have to admit that it was a real treat to work with him."

On how he came to sing the "Carnival Of Souls" song "I Walk Alone":

Bruce: "I worked on that song with Gene for a very long time. We actually recorded basic tracks for a version that was very similar to the final version with Bob Ezrin. There was something there that I really liked, and I worked very, very hard with Gene. I had ideas that I kept presenting to him about how to develop that song, so it kept getting changed. I just got really creative — I wouldn't let it go. I got obsessed with the song. I knew what Gene's melody was by the time he started to form words, so I would sing demos of the new arrangements. Toby Wright, who co-produced the record with Gene and Paul, he heard that, and he said, 'He's got to sing this.' I was not on those demos for the purpose of me being the singer of the song; I was on those demos to show Gene, 'Look how this section now goes into this one.' I have an amazing playlist of various versions of that song with the evolution of it. I'm very proud of it. To me, it's one of the most studio-trickery, QUEEN, BEATLES-like, Hendrix-like thing that KISS ever did."

On how much input he had over his guitar solos during his time with KISS:

Bruce: "[On] 'Asylum', I know that Gene and Paul both were directing me a lot for what they wanted to accomplish, so I was happy to be their interpreter [of] what they heard. By 'Crazy Nights', because [producer Ron] Nevison was there, I had a little more freedom, and that worked well, too. I always try to complement the song and yet make the lead guitar to be an important part of the song. Obviously, when you're working with dominant people like Paul and Gene and in this case Ron Nevison, I want to make everybody happy. I do feel like I accomplished a lot, though, with all of them. I was always learning, and I was always trying to improve on how I could present myself as the lead guitar player. If they wanted fast notes, I gave them fast notes. If they wanted more of just a simple melody with a harmony, I did that. At the time, each album was what we were searching for, and what we did, I think time has been kind to all of them, actually. I still can tell the excitement from the fans. I'm in some ways more proud of some of it even now than I was at the time. I'm happy that we spent time on everything and had a definite goal and a vision."

On bands continuing to tour after losing key original members:

Bruce: "I don't fault KISS for doing what they're doing. I don't fault GUNS N' ROSES for doing what they're doing. GRAND FUNK — there I am. Mark Farner was very much considered to be the lead singer, and even though Don Brewer sang and wrote some of the big hits too, it was always Mark [who was more well-known], yet here we are 17 years [later] doing gigs, and the band's terrific. I have a very good time working with them. No, we don't do festivals and arena tours like KISS does with a huge production, but musically speaking, and for what a musician hopes to perform and have people enjoy it, this past year's been one of our biggest, so it just shows that good classic rock music played well and with a lot of heart and soul, it's still relevant. I'm very happy about that."

On whether he'd be willing to perform with KISS again if given the opportunity:

Bruce: "Why would I say no? But I don't see it happening. They had an opportunity on the Kruise. I think it was better that they didn't, because they didn't need to — I was going to perform with my brother, and that made that to be a highlight of the Kruise, because you know KISS is going to be on the Kruise, so what novelty do you have there? But there was that huge element of my KISStory, of my brother's relationship with the band with some terrific material too. I have to admit, it was one of my most memorable career highlights. I love that everyone's talking about it."

During the recently completed seventh Kiss Kruise, the Kulick brothers played a 13-song set that featured 10 rarely performed KISS songs such as "Turn On The Night" and "All American Man", as well as three classics from Paul Stanley's 1978 solo album (on which Bob performed).