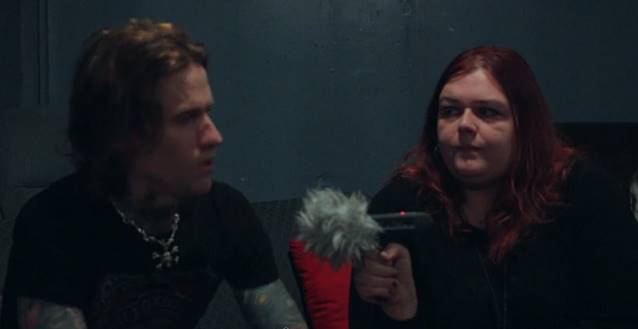 Kristyn Clarke of PopCultureMadness.com recently conducted an interview with vocalist Josh Todd of Californian rockers BUCKCHERRY. You can now watch the chat below.

On whether BUCKCHERRY has had to spend more time on the road as a result of declining record sales:

Josh: "Really, it's, like, you've gotta be on the road if you wanna make a living at this. There's no longer these days where you drop a single and sell millions of records and go out and tour for six months and then you can just chill and enjoy your life. That's never been the way it's been for us, so… I don't know… For some bands that got more established in the early days when you could do that, they're doing alright, but if you're starting out new now, there's none of that left. There wasn't a single gold record by a rock artist last year — not one."

On how the Internet has changed the way BUCKCHERRY connects with its fans:

Josh: "The good news is that everybody has… they can access anything they want without even leaving their house. So people that like you are gonna find you and then they're gonna come out to the shows and then you have this relationship with them over the years; they stick with you if they like you. So that's the great thing, you know. There's always gonna be rock music and rock bands playing out; It's just the way you go about getting it to the people."

On telling stories through BUCKCHERRY's songs and full-length albums:

Josh: "It takes a lot of practice to be able to do it well. And that's the discouraging thing, because there's not a lot of money to make records anymore. There's not a lot of money to sit and work on songs and write and re-write songs and make a whole body of work and get out there and represent it. You just don't have time to do that anymore, because there's not a type of return coming back. So that's why — I hate to say this — the record will go away at some point, because it's a single-driven market now. Everybody's going on iTunes and they just buy the songs that they like — that's it. They don't buy records. I mean, you see it all the time now, even in pop music — [there'll be ] a big pop single, and they'll sell millions of singles, and then the record drops and they sell, like, 15,000 units. So now, I think it's already happening in pop music where people are just dropping singles, new songs, every few months.

"We just made an EP that we're gonna be releasing in the spring that we're really excited about. I don't wanna give it away yet, but there's definitely a theme to this EP, and if you're a BUCKCHERRY fan, it's a must-have. So it's really cool, and [it was] probably one the funnest times I've had writing songs; it's just been a lot of fun."