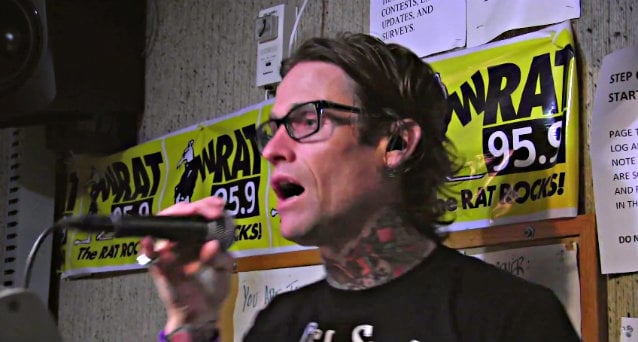 BUCKCHERRY has just released a new EP, simply titled "Fuck", via the band's newly established F Bomb imprint. A six-song EP that unapologetically rattles the speakers as much as it will the censors, the record features six balls-to-the-wall tracks that erupt with gritty riffs and sharp-tongued lyrics, including the radio single and riotous cover of Icona Pop's hit song "I Love It", which the band naturally cranks to 11 and renames "Say Fuck It".

BUCKCHERRY frontman Josh Todd has said in a new interview with Yahoo! Music that "Fuck" is "not just some silly rock record," adding, "It's not about offending anybody as much as celebrating the word. There are so many ways to use the word. We wanted to capture that on an EP and not hold back or censor anything."

The Pulse Of Radio asked Todd if it was difficult to keep coming up with lyrics based around one word. "It was actually super easy," he said. "I have no problem with profanity as you know, so it was like, 'How am I gonna do this in such a way to where — there's so many ways that people use the word and I want to capture that in song.' All the different ways that 'fuck' can come across, you know. That's what I thought about when I was sitting down writing lyrics."