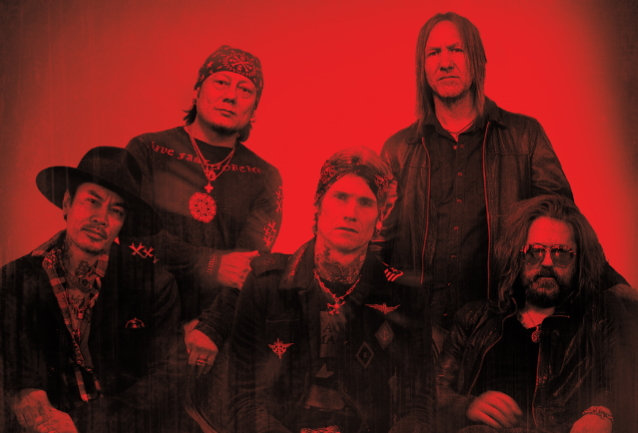 BUCKCHERRY's JOSH TODD On Upcoming Album: 'It's Just So Powerful'

BUCKCHERRY singer Josh Todd spoke to Anne Erickson of Audio Ink Radio about how he and his bandmates have spent their downtime during the COVID-19 pandemic. He said (hear audio below): "We had to shift gears. We had a whole year booked with touring, and then COVID happened. Every month, there was a new set of circumstances, shows falling off for everybody, not just us. And so we were, like, 'Well, we might as well go into songwriting mode and get a really great record together for next year.' And so we shifted gears and just started writing a lot. And, man, this record is good. We spent a lot of time on it, and it's very exciting."

Asked about the musical direction of the new BUCKCHERRY material, Josh said: "Well, it's not gonna change from a BUCKCHERRY rock record. Alls I can say is that we've just come leaps and bounds from the first record, as far as songwriting and how we put everything together. And just as far as the quality of songs, song to song, it's just so powerful. I can't wait for everybody to hear it. Marti Frederiksen is producing it. He produced a few records of ours back in the day. And it's been really great to be reunited with him, and he's a super talented guy. It's like having a sixth band member. So, it's been a lot of fun."

Regarding how BUCKCHERRY has grown and evolved over the years, Josh said: "I think it's just the fact that we never stop working. We never stop creating. If we're not on the road, we're writing songs. I'm a firm believer that you have to really work the muscle in order to really get good at your craft. I don't like to get far away from the craft of songwriting and singing and all that. And everybody in this band feels the same way, so we're united. Whenever we're united, it always makes for great records."

As for a possible release date for the new BUCKCHERRY album, Josh said: "Well, it's gonna be when we know that we can actually tour behind it. So I'm thinking maybe the beginning of summer next year. I'm hoping that's what's gonna happen. But you never know what is coming down the pipeline. I think more will be revealed in November, and then more will be revealed hopefully by the end of the year, with any kind of treatment for this to get us back to where we can put people safely together and do shows."

On November 11 at 5 p.m. EST, BUCKCHERRY will premiere a live show in partnership with the streaming platform LiveXLive Media. The 75-minute performance will include songs from across BUCKCHERRY's 21-year career. The stream will be available for an additional 48 hours for video on demand.

Tickets for the stream are $10 with an optional VIP bundle featuring a personal virtual call with Todd and guitarist Stevie Dacanay for $60.

Tickets can be pre-ordered here.

This past summer, BUCKCHERRY recruited JETBOY's Billy Rowe as its new guitarist. He joined the group as the replacement for Kevin Roentgen, who left BUCKCHERRY in July.

Roentgen joined BUCKCHERRY as the replacement for original guitarist Keith Nelson. He can be heard on "Warpaint", which was released in March 2019 via Century Media/RED Music. The 12-song record was produced by Mike Plotnikoff, whose previous collaboration with the band was BUCKCHERRY's multi-platinum third album, 2005's "15".