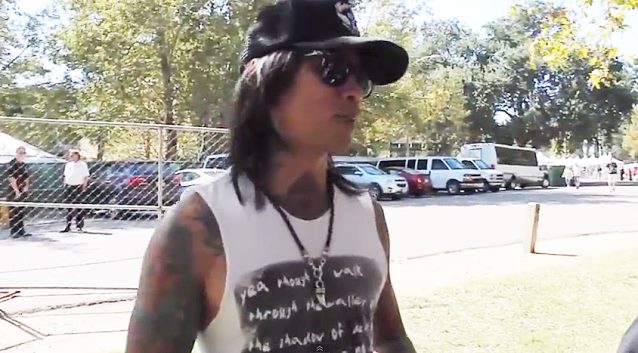 On November 17, 2013, Annalee Hudson of UnderRadioRock.com conducted an interview with guitarist Stevie Dacanay of Californian rockers BUCKCHERRY in Milan, Italy. You can now listen to the chat in the YouTube clip below.

Aside from playing guitar in BUCKCHERRY, Dacanay is a serious photographer who's been chronicling his travels and life on the road.

In a 2011 interview with Flush The Fashion, Stevie stated about his work as a photographer, "I've always been a fan, and a fan of most art forms. but I didn't start shooting and dedicating gross amounts of time until a tour with MÖTLEY CRÜE a few years ago. I have Nikki Sixx and my singer Josh [Todd] to thank for that. They were both highly encouraging and helpful when I started getting serious. Actually, Sixx still is. Then, like any good drug addict, I went off the deep end, started isolating, obsessing. It was all-consuming."