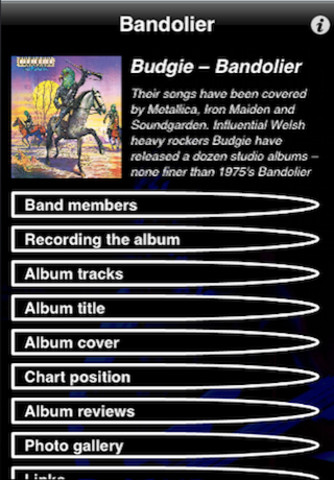 Influential Welsh heavy rockers BUDGIE — whose songs have been covered by METALLICA, IRON MAIDEN and SOUNDGARDEN — have released a dozen studio albums — none finer than 1975's "Bandolier".

A new free app for iPad and iPhone — which tells the story of how "Bandolier" was made, in the band’s words — is available now from iTunes.

When BUDGIE recorded "Bandolier", expectations were high, after 1974's "In For The Kill" had charted. The band, with a new drummer on board, raised the bar and produced a confident and mature album that is noteworthy for the quality of its material, playing, production and sound.

This app tells the story of the making of the "Bandolier" album — in bass player, singer and founding member Burke Shelley's own words. Based on an interview recorded in 2009, the app includes extensive audio of Shelley describing how "Bandolier" was recorded — including his comments on each of the album's tracks. The app's text also includes insights from guitarist Tony Bourge and drummer Steve Williams. In fact, Williams provides full details of the drum kit he used on the album.