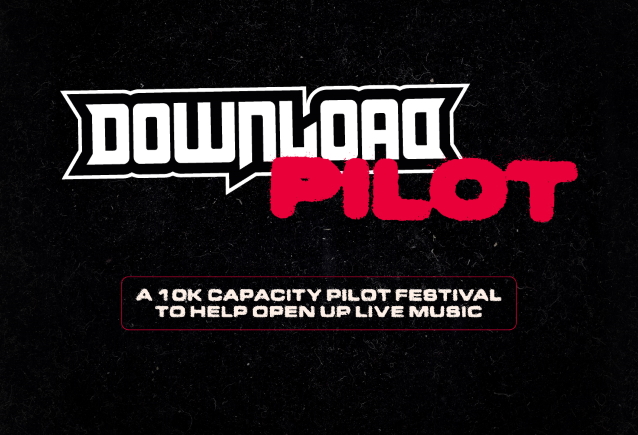 Festival Republic has today announced the lineup for the Download Pilot. The 10,000-capacity, camping-only festival will take place on June 18-20, 2021 on the hallowed grounds of Donington Park, as part of the U.K. government's scientific Events Research Programme. Testament to the depth of talent and strength of the U.K.'s world-leading rock scene, 40 acts, all of whom are based in the U.K., have been revealed, with headliners FRANK CARTER & THE RATTLESNAKES, ENTER SHIKARI and BULLET FOR MY VALENTINE, as well as a host of the hottest names in rock, including NECK DEEP, WHILE SHE SLEEPS, FRANK TURNER & THE SLEEPING SOULS, SLEEP TOKEN, CREEPER and many more across two stages. Tickets go on sale for Download festival 2022 ticketholders on Tuesday, June 1, with general sale starting Thursday, June 3 at 12 p.m. at this location.

Download booker Andy Copping said: "We're incredibly excited to safely welcome back fans to Donington Park and honoured to play a vital part in the return of live music to the U.K. Putting together a lineup of 40 outstanding bands, including headliners like FRANK CARTER & THE RATTLESNAKES, ENTER SHIKARI and BULLET FOR MY VALENTINE, is something the Download brand is uniquely able to do and made possible by a thriving U.K. rock scene and deep pool of in-demand talent. With moshing back on the cards, this is going to be a true celebration of festival spirit and something special to be a part of."

Headlining the Friday are U.K. punk-rock icons FRANK CARTER & THE RATTLESNAKES. A live powerhouse with a socially conscious message, Frank continues to be revered as one of the U.K.'s most prolific and esteemed frontmen in rock today. The Watford crew staged a hugely ambitious lockdown livestreamed show from Brixton Academy, and following the success of third album "End Of Suffering" and new single "My Town", they're primed to kick down the doors for the return of live music in celebration.

Joining them are beloved U.K. pop-punk outfit NECK DEEP, as well as HOLDING ABSENCE who made huge waves this year with the release of acclaimed second album "The Greatest Mistake Of My Life". Blackpool quartet BOSTON MANOR are signed up, as well as Manchester pop rock duo HOT MILK, and the enigmatic SLEEP TOKEN, who will take up their first ever headline slot on the second stage. Sheffield hardcore fivesome MALEVOLANCE and nu-metalcore mob DEATH BLOOMS promise to bring the rage as they start the Friday proceedings.

ENTER SHIKARI will take the headline crown on the Saturday: the genre melding agit-rockers who scored No. 2 with their 2020 album "Nothing Is True And Everything Is Possible" will finally be able to take hits like "Dreamers Hotel" out for a spin alongside their many scene classics. Renowned for their spectacular shows, off-the-wall mash-ups and community spirit, they are set to close the Saturday main stage in style.

Sheffield metalcore mob WHILE SHE SLEEPS have had one of their biggest years following their independently released album "Sleeps Society" and are destined to welcome many more fans into the family. TWIN ATLANTIC will bring stadium-sized anthems, alongside Brighton's YONAKA who have sprung back into action with new single "Seize The Power", while nu-metal upstarts WARGASM and melodic metalcore veterans BLEED FROM WITHIN also make their long-awaited return to the stage. Goth-punks CREEPER step up as second stage headliners as the "Sex, Death And The Infinite Void" era resumes in full swing. Burgeoning metal stars CONJURER and lauded post-hardcore newcomers AS EVERYTHING UNFOLDS are also added to the bill. Glasgow's uncompromising hardcore heroes LOTUS EATER are ready to hit the second stage, as well as hard rockers STONE BROKEN and Scottish pop rock duo VUKOVI. Things promise to get "HiFi Serious" when A roll in. Sleaze-dipped rock purveyors THOSE DAMN CROWS, alternative rock trio THE HARA and Brighton's TIGERCUB complete Saturday's lineup.

Rou Reynolds of ENTER SHIKARI said: "After 18 months trapped inside, we cannot wait to be back in our favorite element; playing music beneath an open sky. Its also fitting, as we have a long history with Download… 2021 being the 15th anniversary of our first time there — which also happened to be our first ever festival show! We're incredibly proud to be headlining an event that helps to get live music back on its feet in the U.K."

BULLET FOR MY VALENTINE are set for a hero's welcome as the Welsh metal giants close out the weekend. Having played a staggering eight high-profile sets at Download festival, BULLET know a thing or two about putting on a show. Crowds can expect a career-spanning, riff-laden set from the band who helped write the metalcore handbook.

FRANK TURNER & THE SLEEPING SOULS has cemented his status as one of the finest songwriters of his generation and will headline the second stage. Fan favorites SKINDRED are incoming with the "Newport Helicopter" in tow, joined by LONELY THE BRAVE and Geordie rockers THE WILDHEARTS. Fast-rising Liverpool metal collective LOATHE and metal innovators EMPLOYED TO SERVE are set for the main stage, as are macabre rockers SAINT AGNES. Also appearing on Sunday are TRASH BOAT, who continue to be a voice for the marginalized, Brit-rock wildcard JAMIE LENMAN, post-hardcore crew STATIC DRESS and the rulebook-shredding hardcore outfit HIGHER POWER. Pop metal princess CASSYETTE, rock'n'rollers MASSIVE WAGONS and hardcore punks CHUBBY & THE GANG all join the bill, and last but by no means least, the world's only Elvis x Nirvana act ELVANA.

Matt Tuck of BULLET FOR MY VALENTINE said: "We're beyond honored to be part of this historic music event to kickstart the live music industry and bringing back live music to people lives. The world has been quiet for too long, time to bring the noise!"

Benji Webb of SKINDRED said: "There is nothing that beats the experience of a live rock 'n' roll show, especially after all the lockdowns. It's something that cannot be downloaded and does not work either as a livestream. So to be involved in this much needed and very special pilot event is an honor. We cannot wait to celebrate and bring the party to Donington Park SKINDRED-style again this June."

The very first major camping event of its kind, the specially created Download Pilot event will form part of the second phase of the government's scientific Events Research Programme. This groundbreaking study will look to build on the evidence base gathered from the successful first phase and apply findings on a greater scale with greater crowd numbers than before. The attendance at the Download Pilot will provide additional evidence for government, event organizers, and consumers on the logistical and practical considerations of reopening events safely, including multi-day events.

Working closely with the government to adhere to safety guidelines, this Download Pilot, as the first 10,000 capacity camping festival event, will play an important role in paving the way for the return of large-scale music events and festivals as the U.K. emerges from the past year's restrictions. As a government scientific Events Research Programme event, festivalgoers will need to consent to take part and must be over 16. There will be no day tickets available with all festivalgoers expected to camp on-site for the duration of the event.

With tickets priced at just £120 (plus booking fee) for the full three-day festival and initially being offered as a thank you to existing Download festival 2022 ticket holders, this loyal community of rock fans will also be rewarded with the closest to a festival experience possible, with no social distancing, no masks, camping and the return of moshing. While this is not Download festival and will be a much smaller scale, Festival Republic is proud to continue its Gold standard (Attitude Is Everything) accessibility and inclusion services, with dedicated accessibility campsite and facilities.

While festival goers will not be socially distanced or required to wear face coverings once inside the festival, they will be required to follow existing government guidance when travelling to and from Donington Park and adhere to rules set out by the festival organizers. Attendees must take a lateral flow test on the morning of the event and receive a negative result to enter the festival. As part of the wider scientific research on the trial events, the Download Pilot attendees will also be asked to take a PCR test before and after the event to gather further evidence on the safety of the festival camping experience, reduced social distancing and the removal of non-pharmaceutical interventions like face coverings. They will also have to provide contact details for NHS Test and Trace to ensure everyone can be traced in the event of an audience member receiving a positive test after the event. 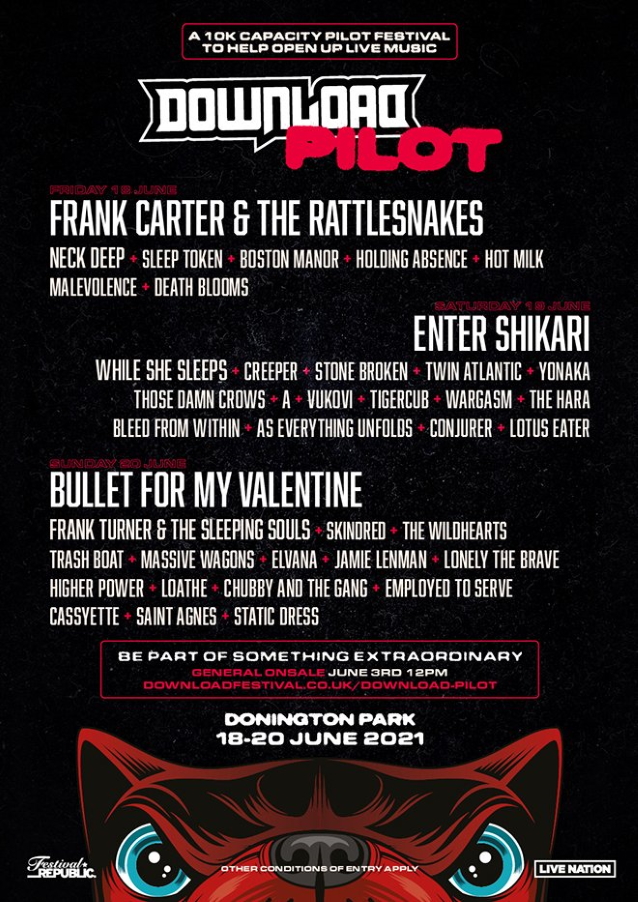