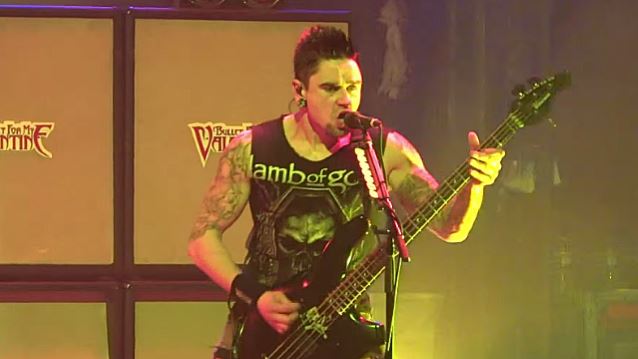 BULLET FOR MY VALENTINE Parts Ways With Bassist JASON JAMES

Welsh metallers BULLET FOR MY VALENTINE have parted ways with bassist Jason James.

Says the band in a statement: "It is with regret that BULLET FOR MY VALENTINE has to announce that Jay James is no longer a member of the band.

"Jay has been a part of this band for well over 12 years and part of our lives forever, and we're gonna miss him as much as we know you guys are too. We wanna wish him all the best and success with whatever he chooses to do next and will always be grateful for his contribution and sacrifices he made for this band.

"We'll announce a replacement for Jay when we feel the time is right, but until then we're gonna be busy and focused recording our next record and making sure its the best album we've ever made.

"2015 is already shaping up to be a massive year for us, with lots of exciting things going on behind the scenes which we'll be announcing as soon as we can."

Says the band: "Going into this process, we couldn't be more happy or excited to have our man Colin Richardson back behind the desk again. We worked with Colin on our first two records, 'The Poison' and 'Scream Aim Fire' (as well as the self-titled BULLET FOR MY VALENTINE EP) and as we listened back to those records during the writing process for this new album, we realized what a special vibe and excitement these records have, and why they're held in such high respect by our fanbase.

"This album, though, is not about going backwards. We're excited to work with Colin again, but equally excited to be working with Carl Bown for the first time, who we consider the most exciting new British record producer out there right now, and the guy to help take this BULLET record to exciting new places."

A new song from BULLET FOR MY VALENTINE titled "Raising Hell" was premiered on the November 18, 2013 edition of BBC Radio 1's "Rock Show" with Daniel P. Carter and was released digitally on December 10, 2013.

The bandmembers, who only released their latest album, "Temper Temper", in March of 2013, recorded and produced the track themselves at Metropolis Studios in between finishing touring America and before their U.K. arena tour, where they debuted the track live for the first time ever.